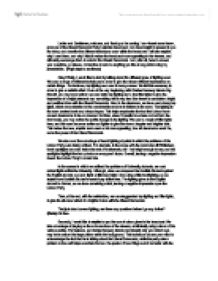 I am &lt;insert name here&gt;, producer of the Liberal Democrat Party's election broadcast. I am here tonight to present to you the video, and describe the different techniques used within the broadcast

Ladies and Gentlemen, welcome, and thank you for coming. I am <insert name here>, producer of the Liberal Democrat Party's election broadcast. I am here tonight to present to you the video, and describe the different techniques used within the broadcast. I will also explain why I used them, and why I think it makes the broadcast more appealing to the viewers, and ultimately encourage them to vote for the Liberal Democrats. I am; after all, here to answer your questions, so please, do feel free to ask me anything you like at any point during my presentation. (Plays tape to audience) Okay! Firstly, I would like to start by talking about the different types of lighting used. We used a range of different techniques in order to give the viewer different impressions on certain things. For instance, top lighting was used in many scenes. We felt this necessary in order to give a realistic effect. Even at the very beginning, with Charles Kennedy introducing himself, you may have noticed we used extra top lighting and a few filler lights to give the impression of a bright pleasant day- something which may lead the viewer to associate a bright and positive future with the Liberal Democrats. Also, in the classroom, we have used strong top lights, which draw attention to the considerable amount of children in the room. The lighting in the room creates harsh and sharp shapes. This helps emphasise the fact that Labour have caused classrooms to be so crowded. ...read more.

Within the classroom, everyday sound is included again, with the scraping of chairs and other typical classroom sounds. When Frankie Fawcett's Father begins to speak, we use diegetic sound once again. Seeing the face of the speaker makes it more personal, and easier for the viewer to empathise, after seeing how ordinary people can be affected. In the sequence concerning the commuter, we emphasised the awful ordeal of using the rail service by using exaggerated parallel sound. This sound device helps show the viewers how the Labour Party is affecting ordinary, everyday people. The everyday sounds inside the train appeared louder, and there was loud prominent coughing that further outlines the terrible, cramped conditions. We used a few sound bridges, which helped smoothen the link between two scenes. We felt it unnecessary to use techniques such as contrapuntal sound, as it might have confused the viewers in such a straightforward broadcast. Before I move onto the next section, are there any questions? Okay. Now onto camera shots. A number of different techniques were used during the broadcast to outline certain aspects and messages put out to the viewers. When there was a speaker on screen, we tended to use more mid shots, which feel friendlier, as we thought that maybe close up shots might have given the impression that you've no option but to listen to this person. But by using mid-shots, you can see the speaker as well as seeing what is going on in the background. ...read more.

We also made sure that the desks were full of school equipment, to give the room a further emphasised effect of busy-ness. Also the viewers will sympathise for the pupils as they look like they are really trying to cope with the cramped conditions, and still trying to work as hard as they can. The fact that Charles Kennedy and Mr.Fawcett are seen wearing suits makes clear that this is a serious matter. In the sequence involving the commuter, we told Jill not to wear smart clothes, and you may have noticed her hair flying all over the place and her make up after the journey was pale and bare, giving her a look of ill health. She never smiled during her commute, and she curled her lip whilst getting off the train. We made sure that it was a dull day in order to parallel the somewhat dull commute. In the scene involving the university students, you may have noticed that the students were sat there, talking quietly, drinking water. This would give the idea that the students are sensible (not drinking beer and bouncing off the walls!) and consequently deserve the right not to pay tuition fees. And then finally, we see lots of happy body language during the celebrations, clapping and waving. Now, that just about concludes my explanation about the broadcast. Are there any questions before I bid you all farewell? (Answers questions) Okay then! Thank you very much for coming ladies and gentlemen, it has been my pleasure to be able to work with such a broadcast, and I wish you all the best for the upcoming election. ...read more.