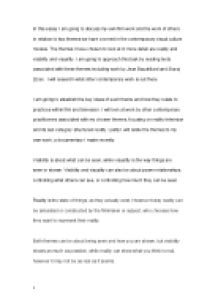 Reflect upon your own art, design or media practice in relation to a least two themes/ideas/theories covered in the Contemporary Visual Culture module and the contemporary creative practice associated with those themes.

﻿In this essay I am going to discuss my own film work and the work of others in relation to two themes we have covered in the contemporary visual culture module. The themes I have chosen to look at in more detail are reality and visibility and visuality. I am going to approach this task by reading texts associated with these themes including work by Jean Baudrillard and Slavoj Zizek. I will research what other contemporary work is out there. I am going to establish the key ideas of each theme and how they relate to practices within film and television. I will look at work by other contemporary practitioners associated with my chosen themes, focusing on reality television and its sub category structured reality. Lastly I will relate the themes to my own work, a documentary I made recently. Visibility is about what can be seen, while visuality is the way things are seen or shown. Visibility and visuality can also be about power relationships, controlling what others can see, or controlling how much they can be seen. Reality is the state of things, as they actually exist. However today reality can be simulated or constructed by the filmmaker or subject, who chooses how they want to represent their reality. Both themes can be about being seen and how you are shown, but visibility shows as much as possible, while reality can show what you think is real, however it may not be as real as it seems. ...read more.

have evolved the documentary genre with a new type of reality TV ? ?structured reality?, where real people play themselves in supposedly real situations. These shows have grounding in reality but have become exaggerated and removed from their source so as to entertain. They been criticized by documentary makers, and have changed the way that documentary stories are captured and told. The disclaimer at the beginning of ?The Only Way Is Essex? stating that ?the people are all real although some of what they do has been set up purely for your entertainment." was added after the first series. This new type of reality questions the authenticity of the participant?s contribution. The producers of a programme can have power over how people are seen. The participants in these constructed reality programmes are playing a simulated version of themselves. They are shown as being real people but are being placed in scripted situation by the programmes producers. Are they be reacting to the situation as themselves or how the producers want them to react? They could be simulating a reaction that could be in reality their own actions, or what they want to be shown as their genuine feelings. They are perceived, as being themselves but what is chosen to be made visible to the viewers could not be reality, but the two cannot be distinguished from each other. They may be themselves in front of the camera, being filmed in their own environments as opposed to a set, but as they ...read more.

how they should portray their reality for the purposes of film making, but sometimes in order to portray reality on film its needs some external influence, while the reality seen on camera may not be a true reality being observed it should portray reality. Subjects and producers have control over how they are seen. People can simulate how they are seen and in what way they are visible to others. Subjects can construct and choose their own reality, which could be seen as being more real as the truth itself. If they hide behind masks they can show their true selves more than if they were being seen as their real self. Both of my chosen themes are apparent in other contemporary practitioners work and my own. In reality TV and structured reality programmes, reality is not always the truth or what is shown to be real. In my work I have set up reality to be filmed in order to portray what is real. However I will need to be careful that I do not influence what is being shown as reality. In conclusion visibility and visuality and reality have many similarities but they show their subjects in different ways. You can pretend to be something but whilst pretending you are, you are still keeping the reality of the real you in place. If you simulate yourself with attributes you do not have you will obfuscate the true reality and it will be difficult for others to know the reality. ...read more.