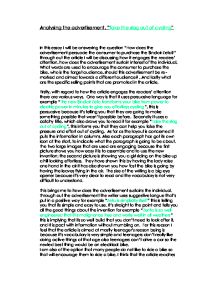 Analysing the advertisement, "Take the slog out of cycling" In this essay I will be answering the question "How does the advertisement persuade the consumer to purchase the Sinclair Zeta?" through out the article I will be discussing how it engages the readers' attention, how does the advertisement sustain interest of the individual, What words are used to encourage the consumer to purchase the bike, who is the target audience, should this advertisement be re-marked and aimed towards a different audience? , And lastly what are the specific selling points that are promoted in the article. Firstly, with regard to how the article engages the readers' attention there are various ways. One way is that it uses persuasive language for example "The new Sinclair Zeta transforms your bike from power to electric power in minutes to give you effortless cycling", this is persuasive because it's telling you that they are going to make something possible that wasn't possible before. ...read more.

This brings me to how does the advertisement sustains the individual. Through out the advertisement the writer uses suggestive langue that's put in a positive way for example "Zeta is simplicity itself" this is telling you that its simple and easy to use. It's straight to the point and tells you all the good things about the invention for example "Zenta is so well engineered that it1s malignance free and works well in all weathers" this is implying that its so well build that you don't need to look after it, and It is pact with information without mumbling on. For this reason I feel that the article is aimed at mostly teenager's reason being is because it's vocabulary is very simple and teenagers don't really like doing active things at that age also teenagers can't drive a car so the nexted best thing would be an electrical bike. ...read more.

of the article would be that it catches your attention with a clear layout, it's easy to read with very large pictures which also helps you to understand the article, there is also a good use of rhetorical questions which makes you want to read on. The disadvantages would be that its not really eye catching and there is quiet a bit of information produced, so people might find that it gets a bit bland after a while. The aim of the whole article was to encourage you to buy a Sinclair Zeta, which is the electric motor that is fixed on to bikes. In conclusion I do thing that the article would persuade me because its is straight to the point, and has large pictures that I can relate to but I also think it would of have a better response if it was produced as a TV advertisement, overall I do think that the company have reached there goal into persuading their audience. ...read more.