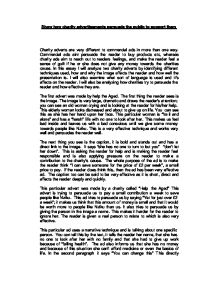 Show how charity advertisements persuade the public to support them.

Show how charity advertisements persuade the public to support them Charity adverts are very different to commercial ads in more than one way. Commercial ads aim persuade the reader to buy products etc, whereas charity ads aim to reach out to readers feelings, and make the reader feel a sense of guilt if he or she does not give any money towards the charities cause. In this essay I will analyze two charity adverts by identifying different techniques used, how and why the image affects the reader and how well the presentation is. I will also examine what sort of language is used and it's affects on the reader. I will also be analyzing how charities try to persuade the reader and how effective they are. The first advert was made by help the Aged. The first thing the reader sees is the image. The image is very large, dramatic and draws the reader's attention; you can see an old woman crying and is looking at the reader for his/her help. This elderly woman looks distressed and about to give up on life. You can see this as she has her hand upon her face. This particular woman is "frail and alone" and has a "harsh" life with no one to look after her. ...read more.

You then see the logo that shows sunset, this gives the reader an impression that time is running out for these poor old people. Now I'm going to be talking about a different advert. First of all I'm going to start with the image. The image is large and stands out. "Mary" is looking directly at the reader. Just by doing this the reader is immediately affected and perhaps is persuaded to read on and become more involved. She is holding a cup of tea probably trying to keep herself as warm as possible. She looks sad, distressed, cold and probably very lonely and is wearing cheap clothing. This make us feel that help is needed especially to such a young girl, and because this girl is young it make the reader feel sorry for her and make him/her want to help as much as they can to provide a shelter fir them. The next thing that catches the reader's attention is the caption; it says "will you give Mary a bed for Christmas?" In that question, the word you directly addresses the reader and tries to get him or her involved and make them responsible for what happens to Mary, Then the word Christmas. Christmas is a time for celebration and happiness but not in Mary's case. ...read more.

Both charity adverts are very persuasive. The technique that is used in the first ad has a story telling technique as it tells us what she's been through. It also talks about only one person which her name is Nziku. The second ad is very similar as its uses the same technique but talks about Mary and talks about thousands and they both show exactly what they need from the reader to make anything possible. Both these adverts are good and effective; they are both easy to use and to pay. They are both quite large and quickly draws the reader's attention. In my opinion I think that the most effective advert was by Help the Aged. I chose this one because the image appeared a lot more dramatic and therefore more effective towards the reader. Also the text is more persuasive and really makes me feel guilty if I do nothing. I also think this ad is the better of the two because old people are less able to take care of themselves than younger people. Both of the adverts try to make the reader to feel responsible and guilty if they do not contribute to the charities cause. All charity ads have to persuade the reader and if this is not done it will not affect the reader as required to do this both adverts have to contain dramatic pictures and use emotive language to make the advert more effective. ...read more.