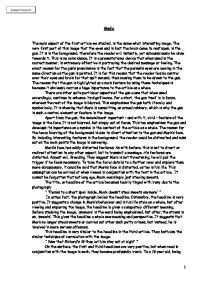 Media The main aspect of the first article we studied, is the some-what interesting image. The very first part of this image that the eyes and in fact the brain come to rest upon, is the gun. It is in the foreground, therefore the reader will instantly, yet subconsciously be draw towards it. This is no coincidence. It is a presentational device that when used in the correct manner, is extremely effective in portraying the desired message or feeling. The exact reason for the gun's prominence is the fact that the person's eyes are looking in the same direction as the gun is pointed. It is for this reason that the reader has no control over their eyes and brain for that split second, thus causing them to be drawn to the gun. The reason that the gun is highlighted as a main feature by using these techniques is because it obviously carries a huge importance to the article as a whole. There are other quite particular aspects of the gun alone that when used accordingly, continue to enhance its significance. For a start, the gun itself is in focus, whereas the rest of the image is blurred. This emphasises the gun both literally and symbolically. It is showing that Mark is committing an armed robbery, which is why the gun is such a central element or feature in the image. Apart from the gun, the second most important - and with it, vivid - feature of the image is the face. It is not blurred, but simply out of focus. This too emphasises the gun and develops its importance as a symbol in the context of the article as a whole. The reason for the heavy blurring of the background is also to divert attention to the gun and Mark's face. By including interesting features in the background, the reader could be distracted and miss out on the main points the image is conveying. ...read more.

It is 'The Children's Society's way of subtly putting their point across that they are always willing to help anyone. No matter what creed, what colour, what race. The other small point regarding the silhouetted figures is the fact that there is a boy, a girl and an adult. This is a representation of their aims and targets. They help everyone and are eager to create family environments for everyone they help. A family suggests support, love, happiness, unity. 'The Children's Society' wish to convey their loving and caring attitude within every little detail, such as their logo. The final aspect of the logo, is the slogan: " 'Making lives worth living' " This miniscule statement is very positive. There is no slight sense of negativity and is completely focused towards optimism and hope for the future. It also outlines 'The Children's Society's main aims. They are here to help. The text in the first article is very negative on the whole. Short sentences and statements are used to convey not only Mark himself, but many other people who are living the same lifestyle. The second paragraph brings the first big shock: " 'That's when he was sentenced to three months in a detention centre.' " This will immediately both shock and amaze the reader. This boy has been locked away for 'petty theft'. The whole article is focused on convincing the general public that sending juveniles to detention centres simply just hinders their chances of ever being able to stop committing crime. In fact, the article is trying to prove to people and persuade them that whilst locked away, most youngsters learn about armed robbery and other such not so 'petty' crimes. This feeling from 'The Children's Society' is enforced using facts and figures: " '80% of the youngsters who leave Juvenile Custody re-offend within two years.' " This both proves the fact that detention centres is where youths learn more about armed robbery and also, Mark is quite clearly not alone in this. ...read more.

At this point, Richard would be totally alone, which is what the image is portraying. All of a sudden, the care is gone and he is left to fend for himself; living the dream in the process: " 'small bedsit, getting on top of him, couldn't cope, no-one to turn to, ended up on the streets. ' " These are just some of the uses of negative language that shows how Richard's life soon became a downwards spiral into debt and poverty, as did Karen's. but once, again - even if slightly more predictable this time - the mention of 'The Children's Society' brings with it optimism and hope for the future, enforced in the increasingly more positive language: "We helped Richard' " Immediately after their mention, we hear that Richard received aid and support. They make an instantaneous difference for the better in the lives of many young people. Despite their help, their goal is to give youngsters a feeling of responsibility and self-respect, which is what Richard is given. He can gradually begin to make a fresh start and fend for himself throughout life. Once again, the charity speaks of the belief and the article draws to a close. At the end of each and every article, an address and contact details are given. This is their subtle plea for aid. They are not directly asking for money, but the implication is that they would be grateful to receive any donations people are willing to make. Each article we have studied uses fictional characters. Neither Mark, Karen or Richard are real people. They are simple representations of the lives of many, many young people in our country today. The reason 'The Children's Society' have decided to do this is to prove to all that they are willing to help no matter what the scenario or how difficult it may be. All they wish to do is give youngsters the life they deserve. 1 ...read more.