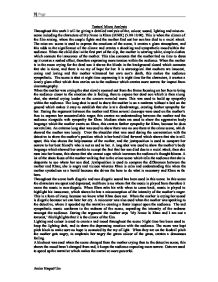 Throughout this work I will be giving a detailed analysis of the, colour, sound, lighting and mise-en-scene including the characters of My Name is Khan (MNIK) (5.00-10.00).

Textual Micro Analysis Throughout this work I will be giving a detailed analysis of the, colour, sound, lighting and mise-en-scene including the characters of My Name is Khan (MNIK) (5.00-10.00). This is when the climax of the film arising, where the couple fights and the mother find out her son has died to a racial attack. The mise-en- scene is used to express the emotions of the scene, it creates a glum atmosphere, and this adds to the significance of the climax and creates a shocking and sympathetic mood within the audience. When the child dies in the first part of the clip, the mother is wearing white, simple clothes which connote the innocence of the mother. This also connotes that the mother had no time to dress up it creates a rushed effect, therefore expressing more tension within the audience. When the mother is in the room crying for the dead son it shows the blinds in the background closed which connotes that she is alone, and there is no ray of hope for her. ...read more.

Medium shots are used to show the aggressive body language which the mother exerts on Khan, this creates further sympathy for Khan, because he does not retaliate. An extreme long shot was used to show there was no one there at the crime scene, which showed the mother was lonely. Over the shoulder shot was used during the conversation with the detective to show the mother's position which is her head tilted forward which shows that she is still upset, this also shows the helplessness of the mother, and the juxtaposition is used to compare her sorrow to her best friend's who is not as sad as her. A long shot was used to show the mother's body language which showed her unable to accept the fact that her son died due to a racial attack, then she runs into her house, this shows that she cannot cope which increases the audience's thoughtfulness. A lot of the shots focus of the mother walking fast to the crime scene which tells the audience that she is desperate to see where her son died. ...read more.

A voiceover was also used when the mother was speaking to the detective, where it speeded up the narrative creating a faster impact upon the audience. The sad sympathetic music conforms to the sadness of the scene, expanding the intensity of the sadness amongst the audience. During the argument the mother says 'My Name Is Khan and I am not a terrorist,' this highlights that it is the climax of the film. Lighting and colour is used to create a sad mood throughout the scene. Night time has been used to keep the lighting dark, and to share the depressing emotion with the audience. The room was kept pitch black to make sure no hope is connoted by the ray of light. When they are on the football pitch the mother gets angry, to emphasis her angry the green colour of the grass, creates a demonous feeling. A blackout was used when the scene changed from the mother crying then to the detective scene, this shows the mood hasn't changed from sad, it keeps the audience expecting more sorrow. Cuts are used to speed up the narrative which makes the narrative more powerful. 2 | Page Amira HaqueFilm ...read more.