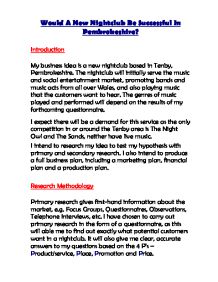 Would A New Nightclub Be Successful In Pembrokeshire?

Would A New Nightclub Be Successful In Pembrokeshire? Introduction My business idea is a new nightclub based in Tenby, Pembrokeshire. The nightclub will initially serve the music and social entertainment market, promoting bands and music acts from all over Wales, and also playing music that the customers want to hear. The genres of music played and performed will depend on the results of my forthcoming questionnaire. I expect there will be a demand for this service as the only competition in or around the Tenby area is The Night Owl and The Sands, neither have live music. I intend to research my idea to test my hypothesis with primary and secondary research. I also intend to produce a full business plan, including a marketing plan, financial plan and a production plan. Research Methodology Primary research gives first-hand information about the market, e.g. ...read more.

* Employment, seasonal, part-time, flexible hours? This secondary research method is extremely useful at indicating what my customers will want and expect. It also informs me of what to expect financially. Results A sample of the questionnaire is on page 1 of the appendix. From all the potential customers I surveyed, 60% of them do not go to nightclubs. This is not a promising start but it gets better when I find out that of this 60%, 3/4's of them do not go because they do not like the music played, which in the case of The Night Owl and The Sands, is always dance and remixed pop music. 100% of the people I surveyed claimed that they would go to a club that specialised in their preferred types of music and would also like to see live bands or musical acts on a weekly basis. ...read more.

From these results and competitor information I have decided to price my entry fee as �5. I feel this is a fair price as the majority of the people I surveyed would be willing to pay �5-�10. One question I asked was 'how far would you be willing to travel to go to a club that specialised in your preferred genres of music?' 10% said they would travel 10 miles maximum. 40% claimed that they would willingly travel between 10 and 30 miles, 30% would travel between 30 and 50 miles, 15% would journey between 50 and 70 miles, and 5% would travel over 70 miles. This indicates that my club would be getting customers from all around Pembrokeshire and further still. From my survey, I found out that the most popular radio station was Radio Pembrokeshire, and the most popular newspaper was The Western Telegraph. From these results, I have decided to put an advert in each. ...read more.