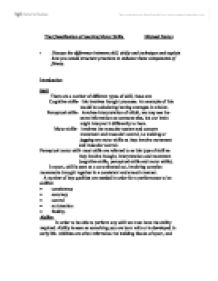 Discuss the difference between skill, abilty and technique and explain how you would structure practices to enhance these components of fitness.

The Classification of teaching Motor Skills Michael Fenton * Discuss the difference between skill, abilty and technique and explain how you would structure practices to enhance these components of fitness. Introduction Skill There are a number of different types of skill, these are: Cognitive skills- this involves thought proccess. An example of this would be calculating batting averages in cricket. Perceptual skills- involves interpretation of stiluli, we may see the same information as someone else, but our brain might interpret it differently to them. Motor skills- involves the muscular system and concern movement and muscular control, i.e walking or jogging are motor skills as they involve movement and muscular control. Perceptual motor skill- most skills are referred to as this type of skill as they involve thought, interpretation and movement (cognitive skills, perceptual skills and motor skills). In sport, skill is seen as a co-ordinated act, involving complex movements brought together in a consistant and smooth manner. A number of key qualities are needed in order for a performance to be skillful: * consistancy * accuracy * control * an intention * fluidity. ...read more.

If we know the general requirements of a particular skill, we can then decide the most appropiate learning and practicing enviroments. There are various methods of categorising skills, all of which demonstrate the need of a flexible and analytical approach. Barbara Knapp recognised two basic classifications of skills. She suggests that skill can fit on a continuum between open and closed. Open skills are those which are directly influenced by the enviroment in which they are performed. They are skills that require adaptations each time they are performed. The adaptation may depend on a range of enviromental conditions, the speed on a ball, the position of an opponent. Thus an open skill is never performed in exactly the same way twice, an example of this is a training match during football practice. Closed skills are those that have no outside physical influences acting upon them. They are the same each time they are performed. The performer will go through 'a pre-learned sequence of motor activities' with no reference to the enviroment in which the skill is being performed. ...read more.

It is not clear where each phase begins or ends. Discrete and continuous skills are often shown on a continuum. Serial skills are those which are made up of a number of discrete or continuous skills put together. These are skills which make up a sequence or routine, such as in a gymnastics floor routine, or a running forehand in tennis. These may not suit all sports or different parts in play in sports, i.e, you can't use discrete when having a practice match in football because there is a physical influence but you can use it when practicing a free-throw. To get the best result it is best to us different kind of training to enhance different skills to raise your game and become the best performer in sport that you can. Conclusion In conclusion, I believe there is a clear relatioship between skill, technique, and abilty. They are all different and seem to all be needed to make the best athlete. You must have the ability to learn the technique aquired and to be skillful you must have the ability and technique. To improve your overall game you have to practice and train all of these using different types of training, i.e, using open and closed skills. ...read more.