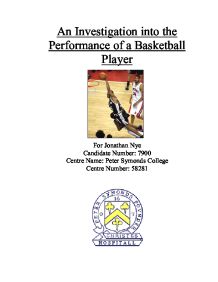 An Investigation Into The Performance Of A Basketball Player

A lack of backspin means that the receiver of the pass often found it difficult to catch. This meant that they often dropped or fumbled the pass, enough for the defensive team to steal the ball. Weakness 3: Doesn't catch the ball on balance. When receiving passes my performer rarely hopped so that they would land on two feet and as a result be on balance and able to select their pivot foot. A top performer will almost always catch the ball in this way, increasing their opportunities once they have caught the ball. The cause of this weakness is simply a lack of practice. My performer needs to practice doing this repeatedly so that this becomes second nature and will do this habitually anytime they receive a pass. This decreases the overall performance of the skill. If the player is under defensive pressure, he may be knocked off balance and commit a travelling violation. He also loses the ability to select his pivot foot; this will reduce the options that he has once he has received the pass and trying to pose an offensive threat. Weakness 4: Doesn't catch the ball in triple threat. On receiving the pass, my performer does not often pull the ball into the "triple threat" position. This means that the ball is pulled into the shoulder with the elbows out in order to protect the ball. From this position it is easy to shoot, pass or dribble the ball - hence the name "triple threat". Like catching the ball on balance, this is also a result of poor technique. The player has simply not practiced this skill enough to make it habitual. This decreases the overall performance of the skill by making it much easier for the defender to knock the ball out of his hands. The ball is not very well protected which makes it much easier for the defender to get a hand on the ball. ...read more.

More generally, a poor free-throw shot will decrease performance in a basketball match, as important points that should be easily claimed after a foul are lost. This can also result in a coach selecting other players over a weak free-throw shooter. "...Free-throw shooting is a skill that must be practiced constantly if it is to be maintained" (J. O'Neal, NBA Player) As my performer needs to improve his technique, I would use guidance training to improve it. This would involve verbal, visual and mechanical guidance to correct the technique and improve the shot. "Guidance is the information given to the performer in order to help them limit possible mistakes (incorrect movement) thus ensuring that the correct movement patterns are carried out more effectively." (Wesson, 2005) Training to improve this would greatly improve the performance of my performer in this sport. Firstly, he would make a greater number of free throws. This would be very beneficial to the team as they would feel the benefit of the extra points. Making these free throws would also increase the coach's faith in him and would likely result in more court time and respect. The opposition would also start to be careful not to foul him, as they would be aware that he is dangerous from the free-throw line. Away from improvements to the free-throw shot, my performer's field goal shooting during regular play would probably increase. Correcting small flaws in his shot technique here can be passed on into the rest of his game hopefully increasing the number of shots, three-pointers and lay-ups my performer makes. Forms Of Data Collection To aid me in collecting data on my performer, I used video analysis. I videoed the performance of a basketball player because: 1. Allows repeated viewing. 2. Slow motion analysis. 3. Able to pause at technical stages. 4. Forms a History/benchmark to refer to. 5. Ensures we do not miss any part of the skill. 6. Allows observations. 7. Allows us to see impact of the environment on skill. ...read more.