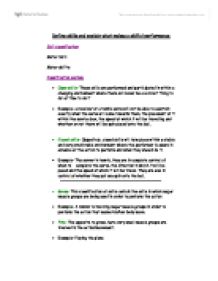 Define skills and explain what makes a skilful performance

Define skills and explain what makes a skilful performance Skill classification Motor Skill: Motor ability: Classification system * Open skills- These skills are performed and participated in within a changing environment where there will never be a correct 'thing to do' or time to do it * Example- a receiver of a tennis serve will not be able to asertain exactly when the serve will come towards them, the placement of it within the service box, the speed at which it will be travelling and whether or not there will be spin placed onto the ball. * Closed skills- Oppositely, closed skills will take place within a stable and very predictable environment where the performer is aware in advance of the action to perform and when they should do it. * Example- The server in tennis, they are in complete control of when to complete the serve, the direction in which it will be paced and the speed at which it will be travel. They are also in control of whether they put any spin onto the ball. * Gross- This classification of skills contain the skills in which major muscle groups are being used in order to perform the action * Example- A runner is involving major muscle groups in order to perform the action that makes his/her body move. ...read more.

* This is a Gross skill, as the performance of it would involve major muscle groups. * It is a serial skill, as the performance of it has to be a sequence of components. It is also discrete as it has a clear beginning and end. * It is self-paced skill as the performer has control over when to begin the sequence of moves, how fast to run, jump, how high the landing will be and the placement of where they will land. Potting the black in snooker * This is a closed skill because snooker has to be played indoors and is therefore not subject to a changing environment. The performer will be aware of his shot selection and when to do what. It is slightly an open skill in that one shot will never be exactly the same, depending on the opponent or on where the black is placed for the finishing shot. * It is a fine skill, as the major muscle groups all over the body are not being used. * This is a discrete skill, as there is a clear beginning and end to the movement. * It is a self-paced skill, as the performer has control over when/ where/ the speed/ on which to hit the ball. ...read more.

These results will come in the form of either a stable speed record, perfect or close to precision for say a serve in tennis to bounce in the corner of the box. The results may also be in terms of power, which in many instances will combine with speed or a persons developed strength for example in weight lifting. Other ways the predetermined results will form are in quality or difficulty i.e. to perform what is said to be the hardest shot in tennis, a backhand smash would be difficult but with practice and skill the results will mean a successful shot. Maximum certainty comes from this, being the certainty of completing the skill successfully i.e. winning the point or passing your defender. The maximum certainty is the maximum amount of times/distance this could happen following your predetermined results, taking into account factors such as weather i.e. the wind direction and speed when playing the backhand smash that may effect the certainty of it being successful. When the skill has been practiced over and over, the result is that a minimum amount of time and energy are needed to be concerned with that particular skill, because it has been perfected and the performer will know how to perform it without thinking about what they are doing, it will become a natural instinct, a proper skill. ...read more.