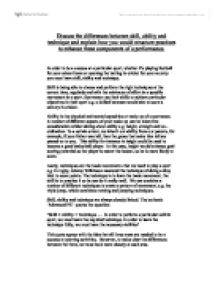 Discuss the differences between skill, ability and technique and explain how you would structure practices to enhance these components of a performance. In order to be a success at a particular sport, whether it's playing football for your school team or opening the batting in cricket for your country you must have skill, ability and technique. Skill is being able to choose and perform the right techniques at the correct time, regularly and with the minimum of effort in a specific movement in a sport. Sportsmen use their skills to achieve particular objectives in their sport e.g. a skilled batsman would aim to score a century in cricket. Ability is the physical and mental capacities or make up of a sportsman. A number of different aspects of your make up can be taken into consideration whilst talking about ability e.g. height, strength and co-ordination. To a certain extent, we inherit our ability from our parents, for example, if your father was tall, then the genes that make him tall are passed on to you. This ability for instance in height could be used to become a good basketball player. In this case, height would enhance goal scoring potential as the player is nearer the basket, so he is more likely to score. ...read more.

It does not involve just one type of skill, but several. Most skills are referred to as perceptual motor skills as they involve thought, interpretation and movement: cognitive skills, perceptual skills and motor skills. In order to perform any skill in sports, you must have the ability to do so. "Excellence of performance-the successful integration of a hierarchy of abilities (all the abilities we have) appropriate to a given task under given conditions. (Professor GP Meredith) Your ability is something that you are born with, so to improve it you need to train. This is the difference between skill and ability. Skill is something learnt and improved through practice. Ability we inherit and can be improved on through specific exercises which enhance physical or mental performance. It's part of our genetic make-up. Here are two definitions of ability to illustrate this point: "Motor abilities are relatively enduring traits which are generally stable qualities or factors that help a person carry out a particular act" (E. Fleishman) "Motor abilities are innate inherited traits that determine an individuals co-ordination, balance, ability and speed of reactions" (R. Arnot and C. Gaines) Technique is often confused with skill. To perform a particular skill in any sport you will have to acquire the technique needed. There are a number of 'classification continuums' that may be used in conjunction with each other to build up a profile of a particular skill. ...read more.

This will enhance performance in the game. The other abilities which, through structured exercises could be improved are speed and flexibility. Speed can be enhanced by working on muscular strength in your legs so you can move faster; flexibility could be improved through regular warm up exercises like stretching leg muscles before play so that you can get the full use of the muscle. The idea that technique has to be a good style to become skilled at it I also think is wrong due to some sportsmen and women having irregular techniques but still excelling in their sport, such as Muttiah Murallitharan, who is one of the greatest spin bowlers in cricket in the world at the current time but has a very unusual technique in the way that he spins the ball. A structured practice to enhance skill could be a simple training exercise in football, such as dribbling a football around objects to improve dribbling skills. The idea that skill equals ability plus technique is the perfect way to describe how to be able to achieve a particular skill. there are a number of different aspects which come into consideration when performing a skill and being successful at that skill. Overall skill is developed by having good ability and having a technique that suits your body type. The definitions of the three practices in these components of performances are all clear definitions that show the true differences between the terms skill, ability and technique. ...read more.