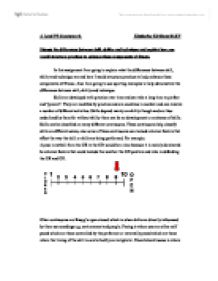 A Level PE Coursework Kimberley Kirkham SAKY Discuss the differences between skill, ability and technique and explain how you would structure practices to enhance these components of fitness. In this assignment I am going to explain what the differences between skill, ability and technique are and how I would structure practices to help enhance these components of fitness. Also I am going to use sporting examples to help demonstrate the differences between skill, ability and technique. Skills are developed with practice over time and can take a long time to perfect and "groove". They are modified by practice and are countless in number and can involve a number of different activities. Skills depend mainly on ability though and are thus underlined by them for without ability there can be no development or existence of skills. Skills can be classified on many different continuums. These continuums help classify skills on different scales, also some of these continuums can include external factors that affect the way the skill or skills are being performed. For example: A pass in netball from the GK to the GD would be a nine because it is mainly dominated be external factors that could include the weather the GD position and who is defending the GK and GD. ...read more.

Some examples of abilities are response orientation which is reacting to different stimuli, manual dexterity which is being good with your hands, strength, reaction time which is how fast you react to various stimuli and "psychomotor which is our ability to process information regarding our movements and to put our decisions into actions" (Advanced Physical education and sport, 1996, page 126), psychomotor ability includes abilities such as reaction time, coordination and manual dexterity Technique is the procedure used to help learn a particular skill in a particular sport. In order to learn the technique you must have the required abilities in order to learn and develop the skill fully. Example to throw a javelin you would first have to have learn the correct technique for it such as where you would position your legs, your body how you would hold the javelin and how you would throw it in order to prevent injury. Also another example is if you want to learn how to throw a shot putt you have to learn how to stand, how to hold the shot as to maximize the distance it is thrown, as well as how to hold and throw the shot in a way that would prevent injury and also how to safely release the shot. ...read more.

For example: if the performer was a Goal Shooter in netball then I would make them practice their shooting over and over again in one place then add external factors such as other netball players as to make the performer react to different situations and to counter act their opponents tactics Also I would make them practice both indoor and outdoor in order to know both ways and to be able to perform well in either situation and as to not become distracted easily because they have trained both ways. In this assignment I have outlined the differences between skill ability and technique and have shown that they are interlinked with each other and without certain abilities there can be no skills and without technique there also cannot be certain skills. I have identified the similarities between each and the differences and have also added sporting examples as to explain what each of them mean. I have also written about how I would structure practices to enhance these components of fitness by talking about what sort of teaching style I would use as well as saying how and what I would teach firstly and why I would teach it to the performer. ...read more.