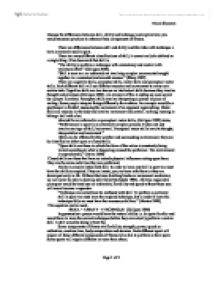 Discuss the differences between skill, ability and technique and explain how you would structure practices to enhance these components of fitness. There are differences between skill and ability and this links with technique a term commonly used in sport. There are many different classifications of skill; it cannot really be defined as a single thing. It has been said that skill is, "The ability to perform a technique with consistency and control with minimum effort." (Galligan 2000). "Skill is seen as a co-ordinated act involving complex movements brought together in a consistent and smooth manner." (Sharp 1992) There are cognitive skills, perceptual skills, motor skills and perceptual motor skills. Each different skill will use different muscles and movements to carry out a certain task. Cognitive skills are also known as intellectual skills because they involve thought and processes (Galligan 2000). An example of this is adding up runs scored by a player in cricket. Perceptual skills involve interpreting a picture or piece of writing. Some people interpret things differently from others. An example would be a goalkeeper in football assessing the movement of an opponent approaching. ...read more.

Some sports will require different or more than others. "Components of fitness are important because without them a performer would not be able to perform their chosen sport or activity. High levels of fitness will hopefully improve the way they undertake their sport, giving a higher performance level. Practice will improve this." (Roscoe 2001). Practice can be defined as, "The repetition of technique and skill, often taken out of the context of a whole game, so that it can be improved." (Sharp 1992) There are different types of practices that could be used; Fixed practice involves repetition of an activity leading to automatic responses. The movement becomes second nature, ideal for non-adaptive skills always the same. This could be a golfer practising putting who will place several b***s on a green and keep on putting them and trying to get them in the hole. This is a closed skill. Variable practice involves a variety of activities and situations. The learner applies the skill to a number of different environments. In practice one learns to apply it to a range of different circumstances (www.sportinfo.com), i.e. starting with a football and moving it from side to side whilst stationary, then at walking pace, then running and finally adding defenders in which to beat. ...read more.

(McArdle 1994) No one can be perfect. It does not exist, although practice can make the skills you have learned permanent, as long as the practice that you are doing is correct for the sport being undertaken. In conclusion is clear that there are differences between skill and ability and that people will use the word skill, but really mean technique. "Technique is how you carry out your actions in a sport, if the correct technique is not taught then the performer will pick up bad habits, which then may affect their performance in the next game." (Barry 2000) Skills and abilities are needed in every sport but at different levels some sports need more than others. " Performers at the elite level must have been born with natural abilities and they develop the specific techniques for them to perform the skills at such a high level." (Galligan 2000). REFERENCE PAGE Morton D et al (2000) Advanced physical education through diagram Roscoe D et al (2001) PE and sports studies advanced level student Beashel P et al (1996) Advanced studies in physical education McArdle WD et al (1994) Essentials of exercise physiology Davids B et al (2000) Physical education and the study of sport Sharpe B (1992) Acquiring skill in sport WORD COUNT 1130 Nicole Sleeman Page 1 of 3 ...read more.