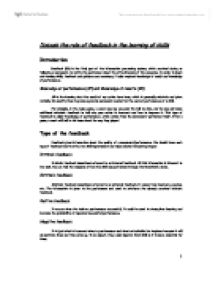 Discuss the role of feedback in the learning of skills Introduction Feedback (FB) is the final part of the information processing system, which received during or following a movement, to notify the performer about the effectiveness of the response. In order to learn and develop skills, feedback and guidance are necessary. It also required knowledge of result and knowledge of performance. Knowledge of performance (KP) and Knowledge of results (KR) KR is the knowing what the result of our action have been, which is generally extrinsic and given verbally. We modify them to produce precise movement needed for the correct performance of a skill. For example, in the rugby game, a coach may say you pass the ball so wide, and he may add some additional extrinsic feedback to tell why your action is incorrect and how to improve it. This type of feedback is called 'knowledge of performance', which arises from the movement/ performer itself. After a game, a coach will tell to his team about the way they played. Type of the feedback Feedback gives information about the quality of a movement/performance. We should know each type of feedback has its effect on skill improvement and value related to learning stages: Intrinsic feedback Intrinsic feedback sometimes referred to as internal feedback. ...read more.

It motivated me to practice more. However, when I start to learn triple jump, I can't do it precisely in many time and then I give up easily. Associative stage This stage is the motor phase of learning, according to the information gathered during cognitive stage. Feedback occurs to understand what they are performance correctly and what elements need to be changed, so verbal feedback is essential on the stage. Learner cannot fully interpret feedback arising intrinsically, so they still have to depend on extrinsic feedback. Negative feedback sometimes is available as it can detect which part of the movement/ task they do wrong and then correct it to motivate them become the higher stage. For example, when I played badminton in this phase, my teacher told me more skill. Afterward, my performance had improved but not yet automatic. Autonomous stage Learner can interpret feedback arising intrinsically. By this stage the learner will be able to assess by the feel of the movement whether the movement itself will be skilful, so the learner is more able to make use of KP, internal and kinaesthetic feedback. Negative is recommended in this stage, especially uses in the tactic. Therefore performer may usually need more specific information. For example, the professional club would train them with different tactics such as 3-5-2, 4-4-2 etc. ...read more.

So it is important the feedback is given as funny as the coach can. However, if the KR is given too much, the performer cannot absorb the information and put it into action. The performer will forget what happens easily as well if the feedback delays too long. For example, when the table-tennis game finish, the teacher will discuss what I was performing. I assimilated quickly since he didn't give so much feedback to me. And next time I perform better. Feedback can be also used as incentive if the coach sets the target to the performer well. The goal may not be neither so easy nor too hard to achieve. When the performer arrive the target with his great effort again and again, it motivates them more essentially. Conclusion In conclusion, feedback is a source of information which tells the performer the outcome of their movement. It can act in different ways and have different effects on people. Feedback can produce positive or negative responses dependent on how well the coach can express and how well the learner can use it. Feedback must be interesting to hold the learner attention and it should be given in correct amount, otherwise, it may not have the desired effect. It has also known that targeting setting with feedback is excellent in the learning process. Feedback would be well-used thoroughly if the coach give it correctly and the performer can analyze them effectively. 1285 words 1 ...read more.