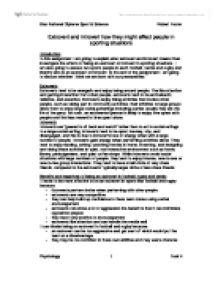 Extrovert and introvert how they might affect people in sporting situations

Extrovert and introvert how they might affect people in sporting situations Introduction In this assignment I am going to explain what extrovert and introvert means then investigate the affects of being an extrovert or introvert in sporting situations. I am also going to assess two sports people in each football, tennis and rugby and identify who is an extravert or introvert. At the end of the assignment I am going to discuss whether I think we are born with our personalities. Extroverts Extroverts tend to be energetic and enjoy being around people. The like attention and getting interaction from other people, extroverts tend to be enthusiastic, talkative, and assertive. Extroverts enjoy doing activities that involve other people, such as taking part in community activities; their affinities to large groups allow them to enjoy large social gatherings including parties usually they are the life of the party. As such, an extroverted person is likely to enjoy time spent with people and find less reward in time spent alone. Introverts Introverts are "geared to sit back and watch" rather than to act in social settings. In a large social setting, introverts tend to be quiet, low-key, shy, and disengaged, and this is due to introvert's loss of energy when with a large number of people. ...read more.

He was allegedly the ringleader of a plot to boycott a Euro 2004 qualifier against Turkey in support of Rio Ferdinand who had banned for missing a drugs test and was believed to be behind a player protest in support of Alan Smith, after he was dropped from the England squad. I believe this justifies that Gary Neville is an extravert he is very outspoken on and off the pitch. He has shows he is not afraid (I believe he likes the media attention) of media attention and speaking his mind which is often controversial. If he was an introvert he would keep away of the media and would not be outspoken on the pitch. Michael Owen Michael Owen is an introverted football player he tends to keep to himself on and off the pitch. He is not a big lowed authority figure on the pitch more of a quiet player. He only speaks to the media about football and does not voice any opinions concerning other players or the FA etc. Michael Owen has a low yellow and red card record which shows he does not like confrontation. At the beginning of Michael Owens career he was very introverted hardly anybody new of him before the 1998 world cup and the Argentina goal that made him famous. ...read more.

Thanks to the fans - they were incredible" he also said "I can't say enough about the team" What he said to the media reinforces that he is a big team man. This also shows an extravert characteristic of enjoying doing activities that involve other people Johnny Wilkinson Johnny Wilkinson is an introverted rugby player but the drop goal during extra time that won England the World Cup in 2003 made him the most famous players in international professional rugby. On the field he has a reputation for accurate kicking and fierce tackling; off the field he has a reputation for practicing incessantly and avoiding publicity. This shows two introverted characteristics one of doing things alone (training) two avoiding media attention (publicity) being shy. Are we born with our personalities? The answer is well there isn't one there is only theories weather we are born with a personality. I believe we may be born with a personality disorder (mental disorder) but they are the ones that have been scientifically proven. I believe our personality depends on environmental factors (schools physiology etc) and hugely how our parents interact with us and other people. Children learn from copying others and they copy there parents more than anybody. 'Parents are gods in the eyes of their children 'I think that phrase sums up how much a parent affects a Childs personality and life. ?? ?? ?? ?? Btec National Diploma Sport & Science Robert Foster 1 Psychology Task 4 ...read more.