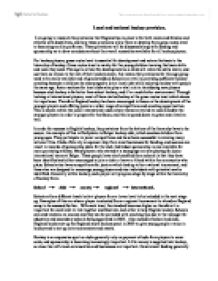 Local and national hockey provision. I am going to research the provisions that England has in place to for both males and females and athletes with disabilities, and how these provisions allow them to develop from grass routes level to becoming an elite performer. These provisions will be discussed along with funding and sponsorship as to draw conclusions about the overall necessities available for all hockey players. For hockey players, grass routes level is essential for development and acts as the basis to the hierarchy of hockey. Grass routes level is mainly for the young children learning the basic skills and rules they need. This age is critical for development as a child will retain the skills learnt, and use them as a basis to the rest of their hockey career, this means that provisions for this age group need to be easily available and of good standard. Schools are vital in providing sufficient hockey coaching because a child can be encouraged to join a local club while enjoying hockey with people the same age. ...read more.

Selectors from different levels look at players from a lower level to be included in the next stage up. Examples of this are when a player is selected from a regional tournament to attend an England camp to be assessed further. With each level, the standard becomes higher so therefore it is important for each level to link together and feed into each other to help English hockey. Schools can send teachers on courses and they can be provided with coaching tips due to the manager for education and secondary schools being appointed in 2005. Also outside of school and club, England hockey set up the England youth hockey panel in 2003 to give young people a voice in hockey and to set up extra tournaments and events. Hockey is an expensive sport so clubs generally rely on payment of subs from players to cover costs, and sponsorship is becoming increasingly important. Little money is supplied into hockey, so close ties with local communities and businesses are important. Government funding generally varies with the success of the higher international teams. ...read more.

In conclusion, I feel that the England hockey is beginning to understand the importance of youth development in hockey .This is eventually going to improve English hockey at the very top levels. The links within each level could be improved especially at county level, but otherwise they are naturally getting better. It seems that the higher the level you play at, the more government funding you will receive, which is also true for individual sponsorship. More money could perhaps be put into clubs and schools to improve the grass route level and encourage younger players to start hockey. This could stop clubs having funding troubles from sponsor's etc. zone hockey is becoming increasingly popular and the funding should continue to be available, however there needs to be local facilities put in place. Overall, I feel that all English hockey is getting better as a whole as it's equal for all. New possibilities are being opened up due to the improvements at grass routes level which will eventually show through the senior international teams. ...read more.