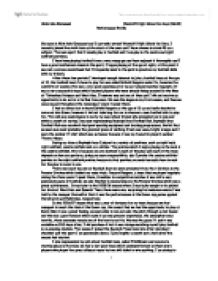 My name is Mide Kole-Emmanuel and I currently attend Westcliff High School for Boys, I recently joined the sixth form at the start of the year and I have chosen to study PE as a subject. The main sport that I usually play is football and I can play in the centre and right midfield positions. I have been playing football from a very young age and have enjoyed it thoroughly and I have a great enthusiasm towards the sport, I began playing at the age of eight, at this point it was not a serious commitment but I frequently went to the park to practice my football skills with my friends. After these few periods I developed enough interest to join a football team at the age of 10, the football team I chose to play for was called Enfield Rangers under 11s, based on the outskirts of London; this was a very good experience for me as I played matches regularly. It was a very successful team which boasted players who were already being scouted by the likes of Tottenham Hotspur and West Ham, I however was not one of them and I did not receive an opportunity to do so for a further few years. We won the league in my first season, and then we came second throughout the remaining 2 years I spent there. I had no choice but to leave Enfield Rangers at the age of 13 as my family decided to move out into Essex, however it did not take long for me to discover a new football club to play for. This club was made known to me by my new school friends who prompted me to join and within a month of moving I was now representing Rayleigh Boys Football Club. Rayleigh Boys Football Club was one which had good sporting equipment and training programmes, the kit that we wore was most probably the greatest piece of clothing I had ever seen, bright orange and I wore the number 14 shirt which was an honour because it was my favourite player's number Thierry Henry. ...read more.

Skill-based Training I have begun skill based training which allows me to develop my football technique; my current manager at Rayleigh Town hired a trainer who helps us by planning drills and allowing us to ask questions which help enhance our skills. The team's philosophy of play is the passing game, which mainly involves one touch football, our coach helps us improve our ability to control the ball first time and pass and move quickly. The team mainly try to play this way but it is not always possible although I thoroughly enjoy doing so. We are also taught to create space for each other, this enables us to split defences more effectively and almost anyone in the team would be capable of making a good run on goal, apart from the central defence. Even the full backs would be able to cause problems on their wings which prove we are an attacking side. Week 2 Circuit training Circuit training will help me to increase my cardiovascular fitness and my strength; it is an activity where I will complete various mini tasks such as sit-ups (x15), push-ups (x15), shuttle runs (x10), climbing (x3), squat jumps (x15), star jumps (x8) and knee ups (x10). The advantage of using the circuit training session is that it allows me to train anywhere I want and it gives me a variety of choices so that prevents it becoming tedious. It took a while to set up the circuit in the gym but it was very effective. The shuttle runs that I set up were approximately 11 metres apart from wall to wall. The climbing was done on a climbing frame that is the type in typical school gyms and was possibly 6 metres high; I went up and down three times. The knee ups were done on a bench and meant I had to do five steps starting with my right leg and the other five steps with my left leg. ...read more.

I believe the training methods which have helped me improve my strength/power are the Plyometrics and Weights training, the methods which have assisted my speed are the Fartlek and Interval training and finally the methods concerning my stamina have been helped by Circuit training and again Fartlek training. The training methods which I have found most enduring are Fartlek, Interval and Circuit training; on the other hand they have been very effective in their function because I have felt an improvement in my speed and stamina. I believe, after completing these training methods I have undergone a process that has caused my slow twitch muscle fibres to be converted into fast twitch muscle fibres. Moreover as my stamina has increased my cardiovascular system has improved, my heart may have increased in size which is called cardiac hypertrophy and this enables it to work more efficiently. The weights training programme is one which is reasonably easy to identify my progress, this is because I have achieved some kind of hypertrophy. From the time that I completed my first weights programme I felt very tired, my muscles were aching after being strained, however these were just short term effects and I know that at this stage my muscle fibres had been broken and overtime once they were healed they would become stronger. I have regularly completed skill-based training, this is when I have trained most of the time, and in these training methods I have improved my shooting and passing skills. I have trained with my team; Rayleigh Town and also had the opportunity to learn my team-mates of good quality. I believe that this meso-cycle has helped me reach my targets, to a certain degree although not to the standard I would like, this may be because I have not completed the full 10 weeks but I am pleased with my progress so far. ?? ?? ?? ?? Mide Kole-Emmanuel Westcliff High School for Boys (16633) Performance Profile 1 ...read more.