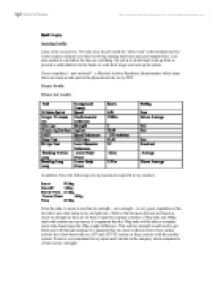 Sport: Rugby Sporting Profile I play in the second row. Not only does my job entail the "dirty work" at the breakdowns but it also requires dynamic activities involving running hard lines and good support lines. I am also needed to win ball at the line out via lifting. My job is to do the hard work up front to provide a solid platform for the backs to work their magic and rack up the points. I have completed - and enclosed* - a Physical Activity Readiness Questionnaire which states that I am ready to take part in the physical activity in my PEP. Fitness Profile Fitness test results: Test Component Tested Score Rating 30 Metre Sprint Speed 4.83 Poor Cooper 12 minute run Cardiovascular endurance 2300m Below Average Chin Ups Strength 5 Fair Illinois Agility Run Agility 18.59 Fair RAST Speed Endurance 7.93 watts/sec Bleep Test VO2 Max 43.43 Fair Sit Ups Test Local Muscular Endurance 32 Excellent Standing Vertical Jump Lower Body Power 42cm Average Standing Long Jump Lower Body Power 1.91m Above Average In addition I have the following one rep maximums (specific to my routine): Squat 92.5kg Deadlift 100kg Bench Press 67.5kg Power Clean 50kg Press 37.5kg From the data, it seems to me that my strength - raw strength - is very good, regardless of the fact that I got a fair rating in my strength test. I believe this because chin ups are based as much on strength as they are on body weight for example consider a 70kg male and 100kg male with similar one rep maxes, it is apparent that the 70kg male will be able to complete more chins based upon the 30kg weight difference. That said my strength would need to get better and will through training. It is apparent that my main weakness stems from cardiac activity be it short burst with my ATP and ATP/PC system or long exercise with the aerobic system. ...read more.

Finally, the sessions may seem very minimal and this could be interpreted as being a negative thing. However a novice trainee only needs very little load to disrupt homeostasis and increase hormonal activity - the production of testosterone, GH e.t.c, and can therefore progress regularly and peak every session. A more advanced trainee would need a much greater workload to disrupt homeostasis and produce any such results such as Smolov's squat cycle, a 13 week cycle of intense squatting designed to peak at the end of the 13 weeks and lift a new 1RM I would alternate between the sessions as suggested in the programme. This workout is designed to increase functional strength which will benefit me as I would be unable to go straight into plyometric training. The idea of the programme is for the athlete (me) to maintain strict form whilst lifting e.g. no loss of lumbar compression during deadlifts, squatting below femur parallel etc. The compound exercises are commonly used amongst the top rugby athletes of the modern for example a guest workout interview for Mens Fitness by Harlequins and England Number 8 Nick Easter had Nick saying the best exercises for rugby strength are squats, cleans and deadlifts. Throughout my studies into strength and power training I found that power can also be trained via working around 70-80% of your 1RM for a medium load. However based upon the fact that power is a function of strength it seems more logical and relevant to continue training maximal strength over the course of the PEP but add plyometrics to the strength training. Interval Training - to develop pure speed and aid power and will most likely be utilised during the last few meso cycles. My training prescription for this would be shorter sprints e.g. 5 seconds, training my phosphocreatine system with a work to rest ratio of 1:6. In order to train pure speed I will aim for 5 sets of 5 sprints and aim to increase the distance ran every session. ...read more.

Whilst it can be argued that say my speed test was only a small increase and therefore my PEP hasn't been effective, I would say that in and short events such as a 30m sprint, there is not great scope for improvement because of the small time frame. Likewise the small increases on the jump scores may have something to do with the fact that, as part of my diet, I gained almost 2 stone whilst on the programme thus my power output will increased even more so. Power is equal to strength x speed, thus if my strength has increased and so has speed then as an athlete I am more powerful. The routine I followed has been very effective, my only criticism would be that the plyometric work I did was very limited but it was enough to produce results on the pitch and improve my performance in general. As a result of my PEP my performances on the pitch have benefited immensely as well, I am much fitter than I was before the programme plus I am much stronger meaning that my running lines have been much harder and when I have the ball as pace I tend to be a menace to put down and break out of many tackles. Also, referring back to the data i found regarding the Springbok norms, I closer to the norms as a result of my PEP, a lock runs a 5.50s 40m sprint and I run a 4.79s 30m sprint so i am close to this norm. In addition the continued strength training i have done has meant that my 1 rep maxes are almost in line with the norms of a Springbok lock. To further improve my performance I would look to run another such offseason programme with an intermediate strength programme such as a modified Westside template to get stronger and bigger to improve my performance on the pitch especially in the step up to senior rugby. ...read more.