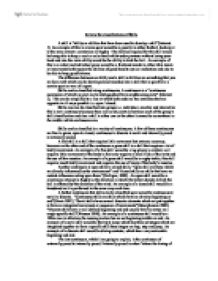 Review the classifications of Skills.

Review the classifications of Skills A skill is "ability or abilities that have been used to develop a skill"(internet 1). An example of this in a team sport would be a penalty in either football, hockey or to the same extent a conversion in Rugby. The abilities required for this skill would be being able to keep a cool or calm head whilst under pressure without losing your head and also the main ability would be the ability to kick the ball. An example of this in a racket and individual game would be a forehand smash in either table tennis or lawn tennis both require the abilities of good hand to eye co-ordination and also to be able to keep good balance. The difference between an ability and a skill is abilities are something that you are born with which can be developed and moulded into a skill that is specific to a certain sport or area of a sport. ...read more.

An example of a closed skill would be a handstand as it is performed in the same way each time. A further continuum that skills can be classified upon would be continuous to serial to discrete. "Continuous skills are skills which have no obvious beginning or end"(Davis 1997). "Serial skills have several discrete elements which art put together to form an integrated movement or sequence of movements"(Honeybourne 2000). "Discrete skills have a well defined beginning and end usually brief in nature as a single specific skill"(Wesson 2000). An example of a continuous skill would be a 100m race in athletics; the running motion has no set beginning middle or end. An example of a serial skill would be the triple jump which has three set stages which are integrated together to form a specific skill these stages are hop, step and jump. An example of a discrete skill would be diving contests, which has a very noticeable beginning and end. The last continuum, which I am going to explain, is the continuum of externally paced to internally paced. ...read more.

A coach can also see what area of skills his players are doing badly this way he can produce a exercise that improves those sort of skills. It is also beneficial for a performer to be able to classify skills so he or she can work out sport specific training. It would also help a performer who is coming back form injury as the could work out a work out that would keep the muscles required for there sport in shape without any actual direct play or direct opponent. A good example of this would be the manager of Crewe Alexandra F.C who realised that his team kept getting wrestled off the ball whilst in the box for a corner or also in direct play. After realising this he decided to take his team for some wrestling training in order to teach them the skill of being able to get away from players whilst up for a corner or dribbling with the ball. ...read more.