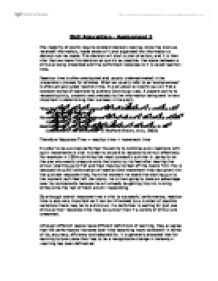 Skill Acquisition - Assignment 3 The majority of sports require constant decision making. Once the brain as received information, made sense of it and organised the information a decision can be made. This decision will start a plan of action, and it is then vital that we make this decision as quickly as possible. the space between a stimulus being presented and the performers response to it is called reaction time. Reaction time is often overlooked and usually underestimated in the preparation process for athletes. What we usually refer to as 'explosiveness' is often actually great reaction time. In just about all sports you will find a constant series of reactions to auditory and visual cues. A players ability to respond quickly, properly and precisely to the information being sent is very important in determining their success in the sport. "Reaction time - the time between the first presentation of a stimulus and the performers reaction" Movement time - the time between the first reaction to the stimulus and the completion of movement Response time - the time from the presentation of the stimulus to the completion of the movement" (J Stafford-Brown, et al, 2003) Therefore Response Time = reaction time + movement time In order to be a skilled performer the ability to combine quick reactions with quick movements is vital in order to be able to respond to stimuli effectively. For example in 100m sprinting the most successful sprinter is going to be the one who exerts pressure onto the blocks by his feet after hearing the stimuli (starting gun) first and then moving his feet off the blocks first. this is because his quick combination of reaction and movement time has given him the quickest response time, from the moment he heard the starting gun to the moment both feet left the blocks. ...read more.

"The main points of Pavlov's theory of classical conditioning are: > Existing behaviour is known as unconditioned response > Behaviour can be conditioned by teaching a response to a specific stimulus" (Stafford-Brown J, et al, 2003) Operant conditioning - this theory is proposed by B F Skinner. He said "behaviour is shaped and maintained by is consequences". Rather than behaviour being the outcome of a response to the stimulus, Skinner sees behaviour as being the result of the action and its consequences. Skinner's theory is concerned with modifying behaviour and response, which is based on trial and error, with the correct response being reinforced. Skinner promotes learning from a demonstration that teaches the skill and then reinforced after the performer has performed the skill successfully. Reinforcement is the key element to Skinner's theory. He described a re-inforcer as anything that strengthens the desired response. This could be verbal praise, a good mark or grade or positive feelings of satisfaction. Example: A rugby player kicks the ball when he should have passed it, by using praise every time the player passes the ball, gradually the player learns to pass the ball. This is known as player modification. However the disadvantage with this is that the player may not know why the response is correct only that he will be rewarded. "The main points of Skinner's operant conditioning are: > Learning is not the result of an association between a stimulus and a response, rather the result of an action and its outcome > Behaviour that is reinforced positively will reoccur > Behaviour which is not positively reinforced will eventually disappear > Learning can be produced through shaping an individuals behaviour" (Stafford-Brown J, et al, 2003) ...read more.

Massed practice occurs when there is no time allocation for rest, while distributed practice occurs when there are rest periods between practices. Research has suggested that distributed practice is more effective than massed practice. This is because motivation and concentration levels are hard to maintain for long periods of time. The rest period in distributed practice enables learners to refresh and enhance their concentration and motivation levels. Fixed versus Variable practice - fixed practice is when some skills are practiced in the same conditions or situation. Variable practice is when skills are practiced in an ever-changing environment or situation. These techniques can be applied to closed and open skills. Open skills need different conditions of practice and the greater the variety, the more beneficial the practice. Therefore open skills are more effectively taught with variable practice. Closed skills will be most effectively practiced through fixed practice as this replicates the game situation. Example: for a penalty in football it is clear that the actual conditions of a penalty should be held fixed in practice. Stimuli that will vary in the game situation such as crowd noise, fatigue and different pressures regarding the score, must be varied. Conclusion Every individual is different and therefore everyone learns in different ways. There are many theories to suggest how we learn and which is the best way for teachers and coaches to present this information to new learners. However teachers and coaches do not have to stick to one theory to be most effective. If this was the case then the teacher or coach would not satisfy the whole learning group, as it is very unlikely that a group of 20 new learners would all learn most effectively from the same theory. Our learning can be affected by many factors such as our innate ability to response, our previous experiences and our ability to transfer our learning. ...read more.