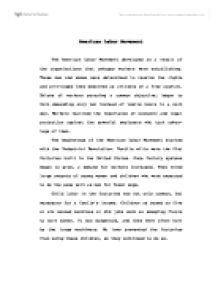 American Labor Movement The American Labor Movement developed as a result of the organizations that unhappy workers were establishing. These men and women were determined to receive the rights and privileges they deserved as citizens of a free country. Unions of workers pursuing a common objective, began to form demanding only ten instead of twelve hours in a work day. Workers realized the importance of economic and legal protection against the powerful employers who took advantage of them. The beginnings of the American Labor Movement started with the Industrial Revolution. Textile mills were the fist factories built in the United States. Once factory systems began to grow, a demand for workers increased. They hired large amounts of young women and children who were expected to do the same work as men for fewer wage. Child labor in the factories was not only common, but necessary for a family's income. ...read more.

In 1886, the American Federation of Labor was formed and replaced the Knights of Labor. Its leader was Samuel Gompers who only wanted to focus on skilled workers. Gompers believed that everyone should receive equal pay for equal work, and that everyone's rights should be protected. A powerful reform called Progressivism swept the country in the early years of the twentieth century. The goal of college professors, ministers, journalist, physicians and social workers was to improve conditions for all Americans. They wanted to make the political system and the economic system more democratic. They were shocked at the fact that Americans were either wealthy or lived a life of poverty. Those who owned the nation's resources should share some of their wealth with the less fortunate was their theory. The progressives were concerned about the country's labor problems. They disagreed with and were disturbed with the growing use of court rulings to halt strikes. ...read more.

They favored unions, and this led to a huge increase in the union membership. Throughout the twentieth century, union struggles increased and decreased. During the 1920's, the economy was high and generally prosperous for all Americans. The Great Depression in the 1930's was a time of hardship and poverty for many workers. Unions actually benefited with the help of Franklin D. Roosevelt. The Wagner Act was passed which guaranteed workers the right to join unions and bargain collectively. The National Labor Relations Board was formed. The board could hold elections so that workers could vote for the union they wanted to represent them. The board could also stop unfair practices used by employers against unions. America was developing into the country it is today. The purpose and philosophy of a union, that a group is more powerful than any individual, has not changed throughout time. Americans are still fighting for what they believe in. They have been since the development of the country. Americans have realized that working together in unison is important for achieving their goals. ...read more.