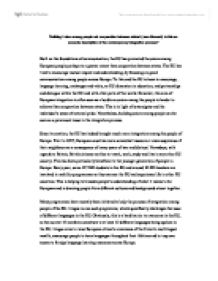 'Building Union among people not cooperation between states' (Jean Monnet) - Is this an accurate description of the contemporary integration process?

'Building Union among people not cooperation between states' (Jean Monnet). Is this an accurate description of the contemporary integration process? Built on the foundations of communication, the EU has promoted the union among European people perhaps to a greater extent than cooperation between states. The EU has tried to encourage mutual respect and understanding, by focusing on good communication among people across Europe. To this end the EU is keen to encourage, language learning, exchanges and visits, an EU dimension in education, and partnerships and dialogue within the EU and with other parts of the world. However, this area of European integration is often seen as a hurdle as union among the people is harder to achieve than cooperation between states. This is in light of sovereignty and the individual's sense of national pride. Nonetheless, building union among people can be seen as a paramount issue in the integration process. Since its creation, the EU has indeed brought much more integration among the people of Europe. Prior to 1957, European countries were somewhat insecure or even suspicious of their neighbours as a consequence of many years of war and distrust. ...read more.

Perhaps the most significant step to integration among the people in contemporary Europe, is the introduction of monetary union in the shape of the Euro. The Euro has had huge impact on the day-to-day lives of the European citizens that it accounts for. It has meant an element of adaptation has had to be endured, but for those who's currency is now the Euro, travel into fellow member states will see familiarity added to their journey in light of sharing the same currency. It abolishes the ritual of having to change currency when going abroad and with that, the hassle of constantly having to figure out the price of foreign goods. It also increases awareness of financial matters with regards to other EU countries as the problem of conversion is no longer an issue. Overall, it creates a greater sense of being European as sharing something as important as currency integrates people to a huge extent. It can be argued that the Maastricht Treaty of 1992 was the turning point in the integration process of the member states with regards to 'Union among the people'. ...read more.

This somewhat European army is to be known as the Rapid Reaction Force and once deployed, is to be able to sustain itself in the field for upto one year. This is a clear indication that the European integration process isn't solely concerned with the uniting of the people. It also is encouraging cooperation between the member states. On the whole, Jean Monnet's claim that the current integration process focuses on 'Building union among the people not cooperation between the states', is to a large extent accurate. He is justified in his statement, as more recently, there as been a more concerted effort to bring the people's of Europe closer together. This is particularly true with regards to efforts being made to overcome the language barrier in the form of the Lingua programme. Undeniably, the introduction of monetary union in the shape of the Euro has also brought the people of Europe much closer together. However, he fails to consider the issue of Common Foreign and Security Policy which renders his statement not entirely accurate. Overall, Jean Monnet's statement is very worthwhile in the EU sphere and is of great importance. Without doubt, it is an accurate description of the contemporary integration process, however, this is only to an extent. ...read more.