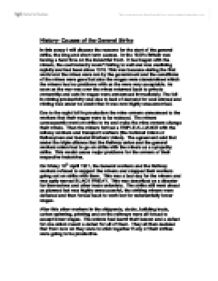 Causes of the General Strike

History- Causes of the General Strike In this essay I will discuss the reasons for the start of the general strike, the long and short term causes. In the 1920's Britain was having a hard time on the industrial front. It had begun with the miners, the coal industry wasn't fairing to well and was declining rapidly and had been since 1918. This was because during the first world war the mines were run by the government and the conditions of the mines were good but also the wages were standardised which the miners had no problems with as the were very acceptable. As soon as the war was over the mines returned back to private ownership and cuts in wages were announced immediately. The fall in mining productivity was due to lack of demand for coal abroad and mining was under no doubt that it was now highly uneconomical. Due to the rapid fall in production the mine owners announced to the workers that their wages were to be reduced. The miners consequently went on strike to try and make the mine owners change their minds. Then the miners formed a TRIPLE ALLIANCE with the railway workers and transport workers (the National Union or Railwaymen and General Workers Union). ...read more.

In May 1925 the price of coal was at �1 a ton, in 1920 it had been as high as �5.75 a ton, the mine owners were trying to find a way to deal with these falling profits. In June and July 1925 the mine owners drew up plans to lengthen working hours and lower wages below the national minimum. The miners now began to plan a strike. The other trade unions, the general workers and the railway workers union all decided to join the miners if they went on strike as a sympathy strike for them. The conservative government could not afford a general strike and offered a subsidy of �23 million pounds to keep wages as they were before they were cut by the mine owners. The miners saw this as a great victory for Labour and named 31st July 1925 Red Friday this was by no means the end of it though as the subsidies were only for nine months. During this time the government set up the Samuel Commission to investigate the problems of British mining and discuss how best to increase its productivity. The report was published in 1926, it rejected nationalisation but recognised a need for modernisation, it also recommended that subsidies should be withdrawn and miners' wages cut. ...read more.

When the TUC had a ballot to determine strike action a huge 3,653,527 voted for strike action whereas only 49,911 voted against it. This showed over whelming support for the strikes to go ahead and go ahead they did. On the 4th may 1926 the workers were told to stop work and went out on strike. In conclusion I think that all the causes discussed played a part in causing the general strike. The miners wanted more money because they felt that they were not being paid enough for what they did. The mine owners wanted to make a profit on their businesses which is highly understandable and if your productivity is falling then you need ways in which to cut your costs. This did not however suit both sides and this is mainly why the general strike happened. There are contributory factors though. When Churchill brought back gold standard it was clear that the price of coal was to rise and this would mean less business abroad and therefore less profits. Then the mine owners would have too cut costs to keep some sort of profit margins. There really is no perfect solution because there is a high level in conflict of interest. The miners and mine owners want different things from the industry. If Churchill had not re-introduced "gold standard" then maybe this would of helped the situation. ...read more.