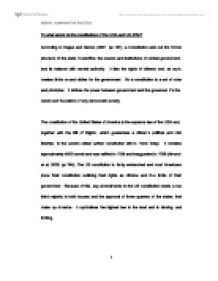 Comparison of US and UK Constitution

To what extent do the constitutions of the USA and UK differ? According to Hague and Harrop (2001, pp 187), a Constitution sets out the formal structure of the state, it specifies the powers and institutions of central government, and its balance with central authority. It lists the rights of citizens and, as such, creates limits on and duties for the government. So a constitution is a set of rules and principles. It defines the power between government and the governed. It's the centre and foundation of any democratic society. The constitution of the United States of America is the supreme law of the USA and, together with the Bill of Rights, which guarantees a citizen's political and civil liberties, is the world's oldest written constitution still in force today. It contains approximately 4000 words and was ratified in 1788 and inaugurated in 1789 (Almond et al, 2006, pp 744). The US constitution is firmly entrenched and most Americans know their constitution outlining their rights as citizens and the limits of their government. Because of this, any amendments to the US constitution needs a two third majority in both houses and the approval of three quarters of the states that make up America. ...read more.

Legal sovereignty is also said to reside with parliament but there is some debate over how much sovereignty has been transferred to the EU as some EU laws are superior to UK laws. Unlike the US, Britain has no enforceable Bill of Rights in its constitution. However the European Human Rights Act does go some way to offer the British citizen with a degree of protection if they feel their rights are violated in some way. This is at the highest level however and initially Brits must appeal to Westminster in the first instance. Perhaps the most obvious difference between the US and UK is how the constitution in the US produces the federal system of government as opposed to the UK unitary system. America's horizontal distribution of power provides for a decentralised political system. Power is shared from national government to state government with each state having its own legislative authority, tax raising and military power. The US constitution provides that the federal state and local government all have constitutionally guaranteed powers. The constitution is concerned about the separation of powers within the government and there are checks and balances in place to ensure no one serving politician has power over another thus preventing a confluence of power in one institution. ...read more.

It is not divided like the USA which is a federal republic that closely adheres to the separations of powers outlined in its constitution in order to prevent the domination of one branch of government over another. The US constitution is indeed written and codified into one formal document containing the Bill of Rights and other various amendments. Whilst the US constitution would seem quite inflexible, it has through a variety of mechanisms, adapted to the changing needs of American society. These mechanisms are formed through various legislation, executive agreements and judicial reviews which, although not as solid as the constitution, are nevertheless treated with the highest regard. The UK constitution is formed from a variety of sources including statute and common law and various conventions but is unwritten and not codified in a single document. It appears more flexible than its US counterpart and has adapted to the changing needs of society quite easily. The US constitution clearly states a separation of powers in government, the UK's does not. The political system that each constitution produces, again superficially appears to be vastly different. With the inclusion of EU law into the UK's constitution and devolved assemblies in Scotland and Wales, the UK unitary political system starts to resemble a much more federal system like the US. ...read more.