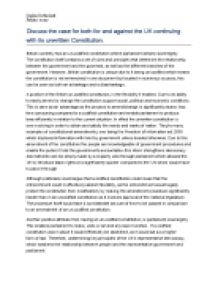 Discuss the case for both for and against the UK continuing with its unwritten Constitution.

This enables parliament to make, undo or amend any laws it wishes. If a codified constitution was in place it would effectively be abolished, as it would act as a higher form of law. Therefore, undermining key principles of the UK?s representative democracy, which weakens the relationship between people and the representative government and parliament. Another advantage of an un-codified constitution is the prevention of an overpowered judiciary. An overpowered judiciary could be seen as an unfavourable decision as the judges are unelected and unrepresentative which in itself is undemocratic. This would lead to the formation of a constitutional court in which judges will adopt a role and obtain sovereignty over parliament; whom has been elected. Therefore, the British political system would lean to a dictatorship state more than democracy. This would not only weaken the relationship between the people and the parliament as representation would be dramatically affected but participation of electing political parties to run the government as the constitution court; whom are not elective representatives, could over ride our representatives. ...read more.