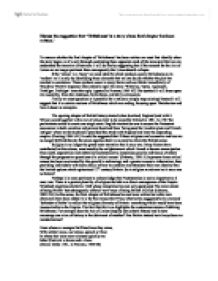 Discuss the suggestion that ''Britishness' is a story whose final chapter has been written.'

Discuss the suggestion that ''Britishness' is a story whose final chapter has been written.' To answer whether the final chapter of 'Britishness' has been written we must first identify when the story began, as it's only through contrasting these opposites ends of the same part that we can understand the narrative in-between. I will do this by suggesting that if the reasons for the Act of Union are no longer pertinent then consequently the Union should collapse. If the 'nation' is a 'story' we must identify which symbols convey Britishness to its 'readers' as it is only by identifying these elements that we can decide whether the plot has reached a conclusion. These symbols come in many forms and one thinks immediately of Woodrow Wyatt's response when asked to spell his name 'Waterloo, Ypres, Agincourt, Trafalgar, Trafalgar' came the reply. (quoted in Paxman,1999: 87) The symbols I will focus upon are monarchy, from the Anderson-Nairn thesis, and daily ceremonies. Finally we must question is it possible for a nation to simply stop existing? Instead I will suggest that it is certain versions of Britishness which are ending, focusing upon Thatcherism and New Labour as examples. The opening chapter of British history started when Scotland, England (and with it Wales) joined together in the Act of Union later to be joined by Ireland in 1801. In 1707 the parliaments united to create one single state. English motivation was to secure the Protestant succession in both countries and prevent Scotland from 'being used for Jacobite plots and French intrigue' where as for Scotland it provided free trade with England and later the expanding empire. (Keating,1996:163) It could be suggested that if these religious and economic motives are no longer fulfilled then by the same equation there is no need to retain the British union. Religion is no longer the grand meta-narrative that it once was. ...read more.

What the information age seems to be offering the consumer is cosmopolitan multi-culturalism which 'seeks to break through the bounds of cultures altogether and to create a society in which individuals, now no longer committed to specific cultures, freely engage in intercultural experiments and evolve a cultural life of their own' (Thompson, 1997:184) The internet functions as a kind of 'global supermarket' from which the consumer selects which ever aspect of a particular culture appeals to them thus giving greater autonomy to how we imagine ourselves. However it is perhaps worth noting that we live in real time not cyber space. Of course this can have the reverse effect. The dislocation and fragmentation created through modernity can lead to greater attachments to particular territorial locations as 'nodes of association and continuity, bounding cultures and communities.'(Rustin, 1987:33-4) From this perspective there is arguably a greater need to be 'British' than ever before. But the 'problem' is that the customs, beliefs and social practices which cement our society are arguably McDonalds, Ikea, Sony and Versace. Does the fact that we embrace these foreign symbols collectively make us any less British or is being British to embrace modernity and through it capitalist western values? Perhaps 'place' has become to limiting of a definition for communities to imagine themselves. It's not just the possibilities offered by technology but diaspora which 'problematizes the cultural and historical mechanics of belonging. It disrupts the fundamental power of territory to determine identity by breaking the simple consequence of explanatory links between place, location and consciousness' (Woodward, 1997:328) Britishness is reconfigured as cultures entwine; as with 'the ironic replacement of the traditional pork pie by a neo-traditional bucket of vindaloo'(Gilroy, 2002:xxv) which now is as British as it gets. In these changing times perhaps the most potent sign to reembed a particular type of Britishness is the monarchy who symbolically function to reinforce the notion of continuity as well as providing a secure social identity through which nationalism is celebrated. ...read more.

In this sense politics, monarchy and daily ceremonies all serve the same function of attempting to create an imagined collectivity between a diverse range of people and communities. It is as ridiculous to think a nation suddenly ceases to exist as it is to claim one ever really existed in the beginning. Andrew Marr suggests in The Day Britain Died (2000) that the 'old Britain' has gone, 'an imperial nation of warriors and colonists and with it the islands certainties' He suggests that Britishness felt strong during battles and that 'perhaps the greatest loss was when we defeated the great enemy Germany who we defined ourselves against.' This Britain, which Waterloo Ypress Agincourt Trafalgar Trafalgar remembers has ceased to exist since the nuclear revolution which has 'helped to restrain the great powers from pushing their competition to the point of conflict, as happened in the past.' (Reynolds, 1991:305) Rather than Britain imposing on European trade as it did during empire, now it is Europe dictating to Britain from Brussles. In a twist in fortune now it is England who are defined the 'great enemy', the 'other' as Wales, Scotland and Ireland opt for devolution. As England has always high-jacked Britishness it is left in a kind of schitzophrenic identity crisis whereby it must become English if it is no longer British 'The Union Jack...is not what it was. For a start, it must now contend with the flag of St. George as an alternative, down-sized iconic signature in the weird post-colonial pageantries of national decline and national rebirth' xxiv Both will feel inadequate and perhaps nostalgically lament for when times were, perhaps, simpler but this does not mean the end of Britishness. It just means that the focus group led politicians will have to be more imaginative than ever when delivering 'bread and circus' representations of BritishnessTM to the public. If nationality as a concept is to remain a means of how communities imagine themselves then it needs to be flexible with its cultural brackets as now technology, migration and social pluralism offers multiple layers of complexity to how we imagine ourselves. ...read more.