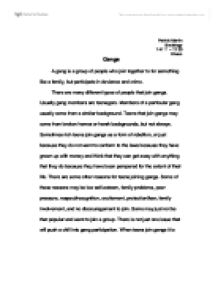 Patrick Martin Sociology T-R 11 - 12:30 Rivers Gangs A gang is a group of people who join together to for something like a family, but participate in deviance and crime. There are many different types of people that join gangs. Usually gang members are teenagers. Members of a particular gang usually come from a similar background. Teens that join gangs may come from broken homes or harsh backgrounds, but not always. Sometimes rich teens join gangs as a form of rebellion, or just because they do not want to conform to the laws because they have grown up with money and think that they can get away with anything that they do because they have been pampered for the extent of their life. ...read more.

There is not just one issue that will push a chill into gang participation. When teens join gangs it is usually because they have a few problems and they think that life would be better if they were part of a bigger group. There are different levels of participation and risk among teens. Some are fascinated by the gang lifestyle because of seeing them on television but do not know the whole truth about them. These children are around 30% of teens, but gangs are not major in their lives. ...read more.

And lastly, but usually the most in trouble are the "member/hardcore members." These are the actual members of gangs who have been beaten in or done something to join the gang. These usually have committed a gang crime or some other deviant behavior. They may also have tattoos or some other form of body art with gang symbols on them. Most gang members have criminal records, and have little or no contact with family, and do not usually attend schools. The hardcore members call the shots within the gangs. These members make up around 30% of teenagers today. Gangs are a major part in our society today. They function as families for some teens, even though they are usually involved in deviant behavior. ...read more.