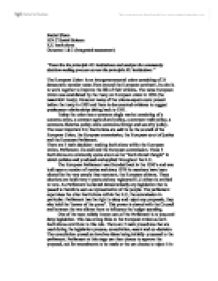 Rachel Sloan H.N.C Social Science E.U Institutions Outcome 1 & 2 (integrated assessment) "Describe the principle EU institutions and analyse the community decision making process across the principle EU institutions." The European Union is an intergovernmental union consisting of 25 democratic member states from around the European continent, its aim is to work together to improve the life of their citizens. The name European Union was established by the treaty on European union in 1992 (the maastricht treaty). However many of the unions aspects were present before the treaty in 1992 and there is documented evidence to suggest predecessor relationships dating back to 1951. Today the union has a common single market consisting of a customs union, a common agricultural policy, a common trade policy, a commons fisheries policy and a commons foreign and security policy. The most important E.U Institutions are said to be the council of the European Union, the European commission, the European court of justice and the European Parliament. There are 3 main decision- making institutions within the European Union, Parliament, Council and the European commission. These 3 institutions are commonly spoke about as the "institutional triangle" in which policies and produced and applied throughout the E.U. The European Parliament was founded back in the 1950's and was built apon a number of treaties and since 1979 its members have been elected by the very people they represent, the European citizens. These elections are held every 5 years and any registered E.U citizen is entitled to vote. ...read more.

When making decisions in council, they follow the same routine as parliament, they all vote to indicate their opinion. The larger the population the more votes they receive for example Netherlands receive 13 votes however Malta only receives 3. In order for the legislation or motion to be passed by council it has to win the qualified majority of the votes, this is usually 72.3% of the total vote. A qualified majority is the number of votes required in the Council for a decision to be adopted. Today majority voting is applied to most decisions made by the council, it is used for a bulk of decisions even as far as legislative leaving only key sensitive issues to be decided unanimously (including tax, social policy, defence, foreign policy and treaty revision). A Qualified or weighted majority means that larger more populous states and given more voters than smaller states. How they determine who gets how many votes as a complex issue, the most recent changed the system was agreed act the nice European council in the year 2000. You Due to the nice treaty, decisions will require a triple majority as of 2005. This means that decisions will need to gain the support of a qualified majority of states, at least 62% of the EU's state population backing it, and at support from at least half of the member state regardless of size. To pass a vote by Qualified majority the proposal must be backed by 232 out of the 321 votes, the countries supporting the proposal must make up at least 62% of the EU population. ...read more.

So if any country has any doubts about any law then they will ask the court of justice for advise and this advise is returned as a preliminary ruling. If there is any suspicion that a country is not upholding the law then the court is called to investigate the matter and issue penalties if it is not sorted then the court has the power to issue penalties. Also if any of the member states find any of the laws to be illegal or against the treaties then they hold the right to take it to have an annulment from the court. If the parliament, commission and council do not make all the decisions they are required to make, the court can officially document the complaints made. The European Union is built up of many different parts and they all work in conjunction with each other to ensure the highest form of life for its citizens. Parliament and Council work together to bring around new laws that will benefit the EU's citizens and the commission proposes these laws and through the use of their DG's have different proposals to be introduced. The court of justice is the institution that deals with complaints and other complications within the system, one of which is to ensure that the law is practised in all member countries and all have a gathered interpretation of it. All of these different institutions are important within the European Union as if they didn't all exist then the Union would not be as successful and democratic. ?? ?? ?? ?? ...read more.