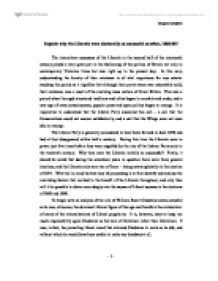 Explain why the Liberals were electorally so successful so often, 1868-85?

Explain why the Liberals were electorally so successful so often, 1868-85? The intermittent successes of the Liberals in the second half of the nineteenth century played a very great part in the fashioning of the politics of Britain not only in contemporary Victorian times but also right up to the present day. In this way, understanding the brevity of their existence is of vital importance for any scholar studying the period as it signifies that although their party status was reasonably solid, their existence was a result of the evolving mass culture of Great Britain. This was a period when the aged structured traditions and elites began to crumble and erode, and a new age of mass consciousness, popular press and open politics began to emerge. It is imperative to understand that the Liberal Party answered this call - a call that the Conservatives could not answer satisfactorily, and a call that the Whigs were not even able to attempt. The Liberal Party is generally considered to have been formed in June 1859 and had all but disappeared within half a century. During this time the Liberals were in power just five times before they were engulfed by the rise of the Labour Party early in the twentieth century. Why then were the Liberals initially so successful? Firstly, it should be noted that during the seventeen years in question there were three general elections, and the Liberals only won two of them - losing catastrophically in the election of 1874. With this in mind the best way of proceeding is to first identify and analyse the overriding factors that worked to the benefit of the Liberals throughout, and only then will it be possible to delve more deeply into the causes of Liberal success in the elections of 1868 and 1880. ...read more.

The general election in 1868 was Gladstone's first opportunity to test his new political machine and very deviously manufactured the election to his advantage by, in effect, making it a referendum on his policies in Ireland. The 'Irish Question' troubled Gladstone his whole career and while it occasionally assisted his popularity, it often also hindered him. In 1868 he had proposed a series of policies in Ireland including the disestablishment of the Church of Ireland. Although central to his beliefs, Gladstone had also picked this as a cause behind which the party could unite and destabilise the Tories.9 This tactic worked successfully in conjunction with his policies on land reform and Gladstone enjoyed a marked victory over the Tories. The Liberal ethos and election promises had also been instrumental in their victory. Gladstone had made it clear that 'the people' would be his priority, and accordingly set out three policy guidelines which would be popular with the work class. As well as terminating the power of the Church of Ireland, he also promised to attack monopolies and liberalise various social practices, winning him the support of the lower middle-class and merchants alike. Promises of the regulation of s*x, drink and trade unions were also made in order to enable a curbing of social nuisances and grievance. Bentley postulates that from this we can see that the Liberal Party was pioneering a new political technique, never effectively used before: Gladstone wished to use his power to do 'good' in the nation, and this took precedence over the eradication of the 'bad'.10 This seems a rather vague argument that does not completely tally with the evidence, though it is possible to draw further conclusions that suggest Gladstone was obsessed with what he wanted to do for the good of the nation, rather than concentrating on the pre-existing blights. ...read more.

He failed in all three. This situation is demonstrative of the history of the Liberal Party: the party, throughout its history, was built on a brittle fragmenting structure of support. The party itself was a conglomeration of Peelites, Radicals and Whigs. Its bulwark of mass support hardly existed, and that which there was, was unreliable and susceptible to a change in party allegiance - a term it is seemingly impossible to use for the Liberal Party. The two remarkable electoral successes for the Liberal Party from 1868-85 owe much to chance and circumstance. Without the emergence of mass political consciousness, without the population being disaffected by economic blight (particularly in 1880) and without the repugnance of a common 'enemy' - the Conservatives, Gladstone would have been hard pressed to find an ear to talk to. This is a point on which there is no debate. However an emerging key historiographical debate in this area is how much of a role Gladstone himself played in the Liberal electoral successes. It is obvious that he was the figurehead for the party and therefore a natural rallying point, however his religious compulsions and obsession with Ireland only served as an impracticable obstacle between further success and further failure. However, there is an equal and opposite argument that states that without his political genius and magnificent rhetoric there would never have been a Liberal Party, let alone a briefly successful one. A decision can only truly be reached when one considers the events both before and after this period, in particular the roots at which Liberalism began and the cliffs where it ended. ...read more.