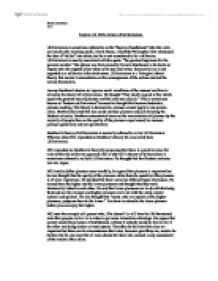 Explain J.S. Mills version of utilitarianism. Utilitarianism is sometimes referred to as the "theory of usefulness" after the Latin root word utilis meaning useful. David Hume, a Scottish Philosopher first introduced the idea of "utility" into ethics, but he is not considered to be a utilitarian. Utilitarianism is usually associated with the quote, "the greatest happiness for the greatest number." this phrase was first coined by Francis Hutcheson in his book an inquiry into the original of our ideas of beauty and virtue, however he too is not regarded as a utilitarian in the strict sense. Utilitarianism is a Teleogical ethical theory, this means it concentrates on the consequences of the actions and not the actions themselves. Jeremy Bentham's desires to improve social conditions of the masses lead him to articulate his theory of Utilitarianism. ...read more.

lying of course is not going to create happiness but the death of someone and many others would cause more pain than the lie. Another example could be the choice to only save one person, there is your son or someone who can cure cancer. If you use the Utilitarian principle you should save the doctor who can save many more lives and create more happiness but, also you would have to take into consideration the life of your son and your own happiness and the happiness of your family. In this situation almost all of us would save the life of our son rather than a person who we do not know. Mill recognised this and came up with the idea of weak rule utilitarianism to explain why this happens. Mill is often regarded as more realistic about human nature than Bentham. Kirsty Densham 12.5 ...read more.