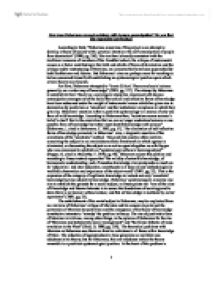 How does Habermas connect sociology with human emancipation? Do you find his arguments convincing?

How does Habermas connect sociology with human emancipation? Do you find his arguments convincing? According to Held, "Habermas conceives of his project as an attempt to develop a theory of society with a practical intention: the self-emancipation of people from domination" (1980, pg. 250). His aim then is broadly consistent with the traditional concerns of members of the Frankfurt school; the critique of instrumental reason as a factor contributing to the birth and rebirth of forms of domination and the critique and/or restructuring of Marxism, are concerns that have been approached by both Horkheimer and Adorno. But Habermas' aims are perhaps more far-reaching as he has concerned himself with establishing an epistemological position upon which critical theory may flourish. For How, Habermas attempted to "locate Critical Theory and social science generally, on a wider map of knowledge" (2003, pg. 117). The attempt by Habermas to establish Critical Theory as a sociological discipline concerned with human emancipation emerges out of the belief that critical and reflective forms of knowledge have been subsumed under the weight of instrumental reason which has given rise to domination by positivism or 'scientism' and the institutional complexes to which they give rise. Habermas' assertion is that a positivist epistemology is a source of only one form of valid knowledge. ...read more.

250). The theoretical problems with Marxism as Habermas sees them are familiar criticisms to all those with a knowledge of Marx. The reduction of superstructure to base generates an inevitable one-sidedness in his theory, but for Habermas, this one-sidedness makes the theory amenable to a positivist epistemological position. At the heart of this problem is Marx's over emphasis on the productive act over the relations prescribed therein. Tipping the balance in favour of the forces of production over the relations of production is for Habermas the cause of deterministic, linear view of history and the subject. What he draws from Marx are the categories of work and interaction from which we may expound Habermas' theory of cognitive interests which suggests how knowledge is generated, the cause of domination, and the possibility of emancipation through his theory of communicative competence and the 'ideal speech situation'. Contrary to the opinion of Marx, it is not only human labour performed co-operatively that distinguishes human beings from animals but also language. It is Habermas' famous assertion that "what raises us out of nature is the only thing whose nature we can know: language" (cited in Pusey, M, 1987, pg. 23). Language permits the development of "of a system of social roles and norms" which ultimately begins to shape human behaviour (Held, D, 1980, pg. ...read more.

Habermas contends that the emancipatory interest "guarantees the connection between theoretical knowledge and an 'objective domain' of practical life which comes into existence as a result of systematically distorted communication and thinly legitimated repression" (cited in McCarthey, T, 1978, pg. 93). The possibility of emancipation from domination is supposedly rooted in the structure of language: "when actors engage communicatively with each other they reproduce/reinterpret culture, social integration and the formation of personality" and "herein lies the potential for emancipation and greater self-determination" (How, A, 2003, pg. 128). Using psychoanalysis as his model for an emancipatory science, Habermas attempts to show that self-reflection and communication lead to the critical resolution of the issues which led to distorted thought processes. Psychoanalysis brings us close to what Habermas call the 'ideal speech situation' in which "all extraneous factors, such as systematic distortions, inequalities and ideologies, are suspended and only the force of the better argument holds sway", moreover, "in this purely theoretical circumstance all people in the communicative situation have an equal chance to present their views" (How, A, 2003, pg. 137). We may witness this domination of distorted communication then, most profoundly in modern capitalist societies in which a process of rationalisation is coupled with capitalist institutions leading to the domination of the system (characterised by instrumental rationality) over lifeworld. Habermas uses the concepts of system and lifeworld to illustrate the 1 ...read more.