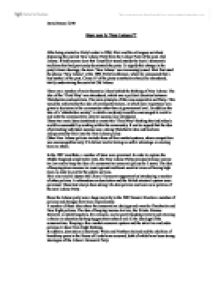 How new is 'New Labour'? After being elected as Party Leader in 1994, Blair and his colleagues set about distancing the current New Labour Party from the Labour Party of the past, Old Labour. It had become clear that Tony Blair stood outside the social democratic traditions that had previously dominated the party. To signify this change in the party's basic ideology, the term 'New Labour' was increasingly used. Blair first used the phrase 'New Labour' at the 1994 Party Conference, where he announced that a key symbol of the past, Clause IV of the party constitution should be abandoned, totally undermining the socialist Old Labour. There are a number of main theoretical ideas behind the thinking of New Labour. ...read more.

In the 1997 manifesto, a number of ideas were promised. In order to capture the Middle England conservative vote, the New Labour Party promised to keep income tax low and to keep the idea of a conservative economic policy for 2 years. The idea of keeping down income tax went against traditional socialist views of having high taxes in order to pay for the public services. Blair also tried to capture the Liberal-Democrat supporters by introducing a number of other policies. A referendum on devolution and the British electoral system were promised. These had always been strong Lib-dem policies and were now policies of the new Labour Party. Since the Labour party won a huge majority in the 1997 General Election a number of policies and changes have been implemented. ...read more.