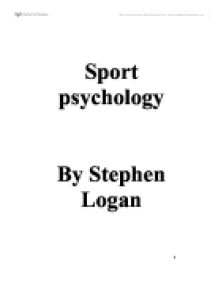 Sport psychology By Stephen Logan For this assignment I shall use a team of my choice as a sporting example of group work and leadership. I will identify the different kind of leader within that group and the style of leadership that they have. The team I have chose to use is Manchester United; a team, which I believe, has many leaders and not just the manager and captain. A team is a group of people who must interact with each other in order to accomplish shared objectives. A team must have: > Interaction between members. > Positive feeling between members. > A collective identity, be different from others. > Share common goal, have the same objectives. Groups go through a four-stage development sequence to move from being just a collection of individuals to becoming a team: (Tuckman 1965) 1. Forming: getting to know others and the roles that they play i.e. captain, position and manager. 2. Storming: conflict between members, rebellion against leader in order to establish roles. 3. Norming: co-operation replaces conflict. Group cohesion develops. 4. Performing: primary goal for each member is group success and roles become more defined. There are many roles within a team both formal and informal: Formal roles may be: > Captain: Roy Keane > Coach: Alex Ferguson > Player's position: strikers, defenders, midfielders and goalkeepers. Informal roles may be: > Mentor: a player other people look up to such as Roy Keane. ...read more.

Typically the democratic leader: --Develops plans to help team members evaluate their own performance --Allow team members to establish goals --Recognizes and encourages achievement. The democratic leadership style is most effective when: --The leader wants to keep team members informed about matters that affect them. --The leader wants team members to share in decision-making and problem-solving duties. --The leader wants to provide opportunities for team members to develop a high sense of personal growth and job satisfaction. --There is a large or complex problem that requires lots of input to solve. --Changes must be made or problems solved that affect team members --You want to encourage team building and participation. Democratic leadership should not be used when: --There is not enough time to get everyone's input. --It's easier and more effective for the manager to make the decision. --The manager feels threatened by this type of leadership. 3. Laissez-faire: The laissez-faire leadership style is also known as the "hands-off� style. It is one in which the manager provides little or no direction and gives team members as much freedom as possible. All authority or power is given to the team members and they must determine goals, make decisions, and resolve problems on their own. This is an effective style to use when: -- Team members are highly skilled, experienced, and educated. -- Team members have pride in their work and the drive to do it successfully on their own. ...read more.

4. Leadership factors: the way that the manager controls the team can effect how you play and what your attitudes to training are. If he is a authoritave leader and is always wanting you to do it his way or no way then players will find it harder to respond to him and perform well. Within or group the factor that influenced us the most would have to have been the team factors. Each member of our group have different levels as to which they wish to attain some were happy to try for a basic grade were as others wanted to get a higher level but then felt why should they be the one to put in all the work and therefore the whole group end up getting the same grade for that piece of work. Also personal factors have influenced the way that our group functioned with people not turning in to do the work on the assignment when arranged. In comparison to Manchester united our group was a shambles we lacked the drive and determination needed in order to obtain the goals that were set. We were not structured in the processes we were going to follow and had no set plan which we were able to abide by. I think our group could have needed an authorative leader in order to reach the targets, but that said it was a good experience to be part of a group like this because now we should see that we need to put in more effort in order to succeed. ?? ?? ?? ?? 1 ...read more.