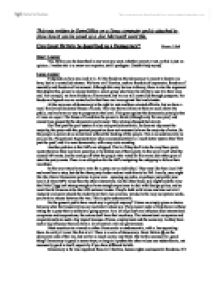 Is conservatism an ideology?

This was written in OpenOffice on a Linux computer and is attached to show how it can be saved as a .doc Microsoft word file. Can Great Britain be described as a Democracy? Dayne J. Salt Short Answer Yes, Britain can be described in any way you want, whether correct or not, as this is just an opinion. I realize this is a smart-ass response, and I apologize. Couldn't help myself. Long Answer It depends on how you look at it. All the freedoms that democracy is meant to bestow we have, but in a controlled manner. We have civil liberties, such as freedom of expression, freedom of assembly and freedom of movement. Although this may be true in theory, there is also the argument that despite this, power is always held by a small group who have the ability to use it to their own end. ...read more.

This is as undemocratic as you can be. Proportional Representation when executed suitably is a much better system than 'first past the post', and it is more democratic, with every vote counting. Another problem is that MP's are whipped. That is if they don't vote the way there party wants them too they can have penalties or be kicked out of there party. In this way it isn't what the elected MP wants, and he cant go off what the people who voted for him want, but rather goes of what the party wants. There is no obligation for the MP's instigating the whipping to follow their manifesto. In this way voters have to vote for a party, not an individual. They may like there local MP and want him to stay, but dislike there party leader and not wish him to be PM. ...read more.

As they have such a big influence they can have a lot of control over our government. Most countries are viewed as either Democratic or undemocratic, with a line separating them. In reality it is not like this at all. There is a scale of democracy. Great Britain IS on the democratic side of the line, but not by as much as you may think. But Is this necessarily a good thing? Democracy is good in some ways, as long as it pushes the other values one subscribes to, not necessarily good in itself, especially if you have different beliefs. Democracy is far less important than civil liberties, human rights and essential freedoms. If I am locked in a prison because of my beliefs, it doesn't matter whether the jailer is a democrat, a monarchist, an anarchist or a totalitarian. I'm still in the damn prison. As Churchill said - "Democracy is the worst form of government - except all the others that have been tried" and "The best argument against democracy is a five-minute conversation with the average voter." ...read more.