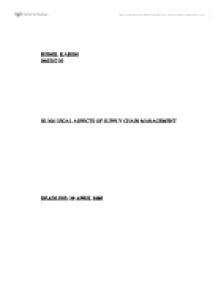 REMIL KARIM 04025210 BL308 LEGAL ASPECTS OF SUPPLY CHAIN MANAGEMENT DEADLINE: 29 APRIL 2005 Internet has definitively changed the relationships of the company with the different business partners of the supply chain. E-Commerce/E-Business is any 'net' business activity that transforms internal and external relationship to create values and exploit market opportunities driven new rules of the connected economy."(Damanpour 2001). It refers to all forms of business activities conducted across the internet. This can include E-tailing, B2B, intranets and extranets, online advertising (e.g. advertising banners), and simply online presences of any form that are used for some type of communication (customer service for example). With internet the commerce does not have limits or borders and the e-businesses are negotiated in 'virtual shopping males' and 'board rooms'. This paper deals with the legal issue of the e-commerce in the European Union (EU) notably the contract law applied to the internet. How to constitute a traditional contract via internet without concrete negotiation and face-to-face? How to insure the respect of the procedure and the terms of the contract on-line? Then I analysed the fact that this issue is controversial but also current and how it affects the Supply Chain. The main issue of the e-commerce is contract law applied to internet in the EU supported by the EU Directives 2000/EC. In 2000, "EU attempted to construct a basic framework for the future regulation of e-commerce" (Pappas 2003). ...read more.

.The e-signature must "satisfy the legal requirements of a signature in relation to data in electronic form in the same manner as a hand- written signature satisfies those requirements in relation to paper-based data; and are admissible as evidence in legal proceedings." Furthermore, the jurisdiction is important when contracting online because the buyer has to know which law apply to him in case of dispute with the supplier. "The contract should have a clear choice of law and jurisdiction clause e.g. that the contract is subject to the Laws of England and disputes must be heard in that jurisdiction." (Elborne 2000). "Businesses which sell goods to foreign nationals over the internet will be subject to the consumer laws of their home country" indeed, the contract is often under the jurisdiction of the home country where the transaction is made (Singleton 1999). "In the EU jurisdiction of disputes is determined by reference to the Brussels Regulation (which has superseded the Brussels Convention). If the parties have not agreed jurisdiction, the basic rule is that a defendant may be sued where it is domiciled or in the place of performance of the contractual obligation." (Principia 2000) For instance if a British company decides to purchase raw materials in Russia, in case of dispute a Russian jurisdiction shall be in charge of the issue. However in the European Economic Area, "the basic principle is that the parties can choose the governing law and the forum for dispute resolution (i.e. ...read more.

what are the terms? and where is the contract governed?". Furthermore, EU laws do not always comply with the international laws and EU institutions must enact legislation to be "adequate" with the world trade. In order to reduce risks in online contracting, supply chain organisations must "keep their website accurate and up to date, use clear terms and conditions and know when contracts are formed" and maintain records of contracts and dealing with customers. According to Baker & Mc Kenzie (2001) "They must establish where and how disputes will be resolved and be aware advertising, distance selling, data protection..." Organisations must specify in the terms and condition the government law and jurisdiction for disputes if they want to reduce uncertainty and cost. Baker & Mc Kenzie (2001) also suggest "Perhaps the most important point is that IT systems themselves will have to be designed to minimise legal risks, such as ensuring that any evidential requirements will be satisfied." In summary E-commerce has increased considerably and in short-term shall overtake the traditional trade. In one hand, business online is definitively an important way of generating profits for the firms and in the other hand it is also risky and represents a threat for many managers. Contracting online presents many problems such as the signature, jurisdiction however a "careful implementation of the contract formation process and content will increase the probability that a contract is enforceable" (Greguras 1995). E-commerce needs time and agreement between the states to be more secure and increase more. ...read more.