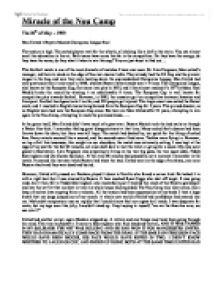 Miracle of the Nou Camp

Miracle of the Nou Camp The 26th of May - 1999 Man United v Bayern Munich Champions League final The tension is high. The united players wait for the whistle, all shaking like a leaf in the storm. You can almost smell the adrenaline in the air. Both teams have come this far in the competition. Do they have the energy, do they have the nerve, do they what it takes to win this cup? You are just about to find out.... This football match is one of the most dramatic of matches I have ever seen. Sir Alex Ferguson, Man united's manager, led them to stand on the edge of the ever elusive treble. They already had the FA Cup and the premier league in the bag, and now they were hunting down the unprecedented Champions League. Man United had only previously won it only once in 1968, whereas Bayern have already won it 3 times. ...read more.

At this time 80 minutes had passed by, not a moment I remember in the match. It seemed like last year when Bayern had taken the lead. United were on the edge of an abyss, one more Bayern attack and they were dead and buried. However, United still pressed on. Becham played it down to Neville who forced a corner kick. He lashed it in with a right boot but it was cleared by Bayern. It then reached Ryan Giggs who shot off target. It was going wide, but it then fell to Teddy Sherringham who masterfully put it beyond the reach of the Bayern goalkeeper and into the net! At that moment in time my whole house had exploded. The Nou Camp also went crazy, like a heap of molten lava erupting from a volcano. All the tension had been squeezed out of my body. I then a huge breath that my lungs jumped out of my mouth. ...read more.

Sir Alex Ferguson had summed it up in a few words. "The most important factor was the spirit of the team, they just never give in, they don't know how to". The following clip I am about to show you sums up the history of the European Cup, shows Man United scoring both their late goals and celebrating this huge triumph. Enjoy! As this being a football match, it has not won any special awards. But I think that it will always win an award in my heart. I would personally recommend anyone to watch this unbelievable match, but especially the last 10 minutes. As I have already mentioned a lot can be learnt from it, and it could also influence youngsters to take up football. This wasn't just an ordinary football match; it was a breath-taking encounter. So if you see a video of this match in the shops you know what to do. I leave you with a clip of Man United scoring both their goals, and celebrating this incredible triumph. ...read more.