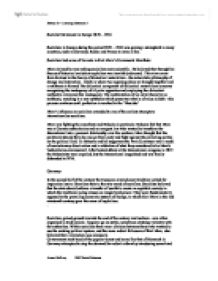 Socialist Movement in Europe 1870 - 1914 Socialism in Europe during the period 1970 - 1914 was gaining a stronghold in many countries, such as Germany, Russia and France to name a few. Socialism had some of its roots in Karl Marx's Communist Manifesto Marx claimed he was making socialism more scientific. He believed that through his theory of historical evolution capitalism was inevitably doomed. This view came from his trust in the theory of dialectical materialism - the naturalistic philosophy of change and interaction - which is where two opposing ideas are brought together and a antithesis is formed The dialectical component of dialectical materialism concerns recognising the inadequacy of all polar opposites and employing the dialectical method to overcome that inadequacy. The confrontation of an initial thesis by an antithesis, resulting in a new synthesis which preserves what is of value in both - this process continues until perfection is reached in the 'Absolute' Marx's influence on socialism extended to one of the earliest attempts to internationalise socialism. Marx was fighting the anarchists and Bakunin in particular. Bakunin felt that Marx was a German authoritarian and an arrogant Jew who wanted to transform the International into a personal dictatorship over the workers. Marx thought that the proletariat should form its own political party and fight against the prevailing parties on the political field. To Bakunin and his supporters the Paris Commune was a model of revolutionary direct action and a refutation of what they considered to be Marx's 'authoritarian communism'. ...read more.

The Mensheviks were suppressed by 1921. Meanwhile, in 1918, the Bolsheviks became the Russian Communist party. RUSSIA In 1869, two Russian writers, Mikhail Bakunin and Sergi Nechayev published the book Catechism of a Revolutionist. It included the famous passage: "The Revolutionist is a doomed man. He has no private interests, no affairs, sentiments, ties, property nor even a name of his own. His entire being is devoured by one purpose, one thought, one passion - the revolution. Heart and soul, not merely by word but by deed, he has severed every link with the social order and with the entire civilized world; with the laws, good manners, conventions, and morality of that world. He is its merciless enemy and continues to inhabit it with only one purpose - to destroy it." The book had a great impact on young Russians and in 1876 the group Land and Liberty was formed. Most of the group shared Bakunin's anarchist views and demanded that Russia's land should be handed over to the peasants and the State should be destroyed. It remained a small secret society and at its peak only had around 200 members. Some reformers favoured a policy of terrorism to obtain reform and on 14th April, 1879, Alexander Soloviev tried to kill Alexender 11. His attempt failed and he was executed the following month. So also were sixteen other men suspected of terrorism. ...read more.

When the procession of workers reached the Winter Palace it was attacked by the police and the Cossacks. Over 100 workers were killed and some 300 wounded. The incident, known as b****y Sunday, signalled the start of the 1905 Revolution. Strikes took place all over the country and the universities closed down when the whole student body complained about the lack of civil liberties by staging a walkout. Lawyers, doctor, engineers, and other middle-class workers established the Union of Unions and demanded a constituent assembly. In June, 1905, sailors on the Potemkin battleship, protested against the serving of rotten meat. The captain ordered that the ringleaders to be shot. The firing-squad refused to carry out the order and joined with the rest of the crew in throwing the officers overboard. The Potemkin Mutiny spread to other units in the army and navy. Industrial workers all over Russia went on strike and in October, 1905, the railwaymen went on strike which paralyzed the whole Russian railway network. Later that month, Leon Trotsky and other Mensheviks established the St. Petersburg Soviet. Over the next few weeks over 50 of these soviets were formed all over Russia. The Chief Minister advised Nicholas II to make concessions. He eventually agreed and published the October Manifesto. This granted freedom of conscience, speech, meeting and association. He also promised that in future people would not be imprisoned without trial. Finally he announced that no law would become operative without the approval of a new organization called the Duma. History B - Learning Outcome 2 Aveen McEvoy HNC Social Sciences ...read more.