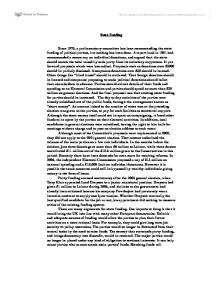 State Funding Since 1976, a parliamentary committee has been recommending the state funding of political parties, but nothing has been done. A report back in 1981 had recommended a severe cap on individual donations, and argued that the state should match the total raised by each party from its voluntary supporters. It put forward proposals which were less radical. Proposals such as donations over �5000 should be publicly disclosed. Anonymous donations over �50 should be banned. Other things like "blind trusts" should be outlawed. That foreign donation should be banned and companies proposing to make political donations should ballot their shareholders in advance. Parties should submit details of their funds and spending to an Electoral Commission and parties should spend no more than �20 million on general elections. And the final proposal was that existing state funding for parties should be increased. The day to day activities of the parties were already subsidised out of the public funds, through the arrangement known as "short money". ...read more.

In 2004, the independent Electoral Commission proposed a cap of �15 million on national spending and a �10,000 limit on individual donations. However it is possible that such measures could still be bypassed by wealthy individuals giving money in the form of loans. Party funding aroused controversy after the 2005 general election, when Tony Blair appointed Lord Drayson to a junior ministerial position. Drayson had given �1 million to Labour during 2004, and his links to the government had already been criticised because his company Powderject had previously won a lucrative contract to supply smallpox vaccine. Whether Drayson was really the best qualified candidate for the job or not, his appointment did nothing to reassure critics of the existing funding system. There are many arguments for state funding. One important thing is that it would bring the UK into line with many other European democracies. Reliable and adequate sources of funding would allow the parties to plan their future activities on a more rational basis. ...read more.

If funding were linked to the level of support at the previous election, it would tend to reduce the chances of minor parties making a breakthrough. While guarding against corruption, reform could prevent idealistic, wealthy individuals from helping unorthodox ideas to win a hearing. The results of sate funding in other countries have been mixed. In Italy, it was abolished amid claims that it had actually increased corruption. Other disadvantages are that it will discourage independents standing for parliament, it will discourage membership and active parties and loopholes can be found. The single transferable vote system uses multi-member constituencies only. Voting is preferential: that is, electors indicate their preferences among a potentially large number of candidates by writing 'I' beside the name of their first preference, '2' next to the name of their second choice and so on. Voting is also ordinal: electors can vote for as many or as few candidates as they like. A candidate must achieve a quota, known as the Droop quota, in order to be elected. ...read more.