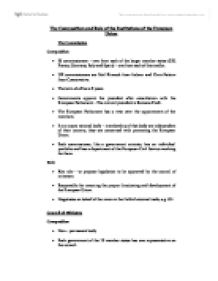 The Composition and Role of the Institutions of the European Union

The Composition and Role of the Institutions of the European Union The Commission Composition * 20 commissioners - two from each of the larger member states (UK, France, Germany, Italy and Spain) - one from each of the smaller. * UK commissioners are Neil Kinnock from Labour and Chris Pattern from Conservative. * The term of office is 5 years. * Governments appoint the president after consultation with the European Parliament - The current president is Romano Prodi. * The European Parliament has a veto over the appointment of the members. ...read more.

* Responsible for ensuring the proper functioning and development of the European Union. * Negotiates on behalf of the union in the field of external trade, e.g. Oil. Council of Ministers Composition * Non - permanent body * Each government of the 15 member states has one representative on the council. * Its composition varies according to the subject under discussion, the appropriate minister will attend for each topic. Role * Key Role - to vote through legislation. * Have power to instruct the Commission to undertake particular investigations. ...read more.

Role * It has supervisory power over the Commission. It has a right of veto over the appointment of the Commission as a whole, and can also dismiss the whole commission by a vote of censure. * The parliament has observatory powers over the Council. Parliament reports on it three times a year and the president of the council is obliged to address the parliament once a year followed by a debate. * Parliament can bring actions against other European Union institutions for failure to implement European law. * Parliament can set up committees of inquiry to investigate alleged contraventions of European law. ...read more.