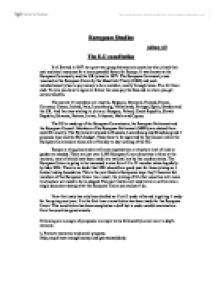 European Studies Adnan Ali The E.U constitution It all Started in 1957 as a post-war group between six countries who joined their coal and steel resources for a more peaceful future for Europe. It was known as the European Community and the UK joined in 1973. The European Community was renamed as the European Union by the Maastricht Treaty (1993) and each member/country has to pay money to be a member, mostly through taxes. It's a bit like a club. To join you have to agree to follow the rules pay the fees and in return you get certain benefits. The current 15 members are: Austria, Belgium, Denmark, Finland, France, Germany, Greece, Ireland, Italy, Luxembourg, Netherlands, Portugal, Spain, Sweden and the UK. And the ones wishing to join are: Hungary, Poland, Czech Republic, Slovak Republic, Slovenia, Estonia, Latvia, Lithuania, Malta and Cyprus. The EU is made up of the European Commission, the European Parliament and the European Council. Members of the European Parliament (MEPs) are elected from each EU country. The Parliament is based in Brussels, Luxembourg and Strasbourg and it proposes laws and the EU's budget. ...read more.

Members of the European Parliament (MEPs) are elected every five years. Anyone over 18 from a member country may vote. For many years now the European parliament has complained that it hasn't been given its proper role. The proposal is to bring it more decision/law making procedures. It wants more power as to vote on nearly all European Union decisions and elects the president of the commission. According to certain sources (BBC) the plan will be popular among the bigger countries. European prosecutor The proposal is to have a European prosecutor. It wishes to have more joint action in both criminal and civil law. A number of countries seem to be opposed to these proposals on the grounds that 'inter-governmental' co-operation is enough as it is. Citizenship As it stands right now everyone will have an E.U citizenship as well as having a national citizenship. This proposal allows people to live and work anywhere within the European Union. The new proposal stresses that it does not displace the rights of national citizenship. Leaving the European Union This proposal states that any member wishing to leave must notify the council of its intentions and as a result the union shall conclude and decide and agreement with that member setting out what is needed for its withdrawal. ...read more.

While Dutch architect Rem Koolhaas thinks this perfection can be improved - his new flag uses 45 stripes which are vertical, taking colours from every country or member's national flag. The logo was designed in response to a request by the European Commission president Romano Prodi to find ways of rebranding the EU. People have suggested why not just add stars to the existing design as new members join the EU. The United States flag has changed 27 times since the Stars and Stripes was made in 1777 - with 25 of those changes made to add new stars as new states entered. The old flag (left) and one of the new ideas Overall I havent come to a decision and the real reason is because I don't understand the proposals that well. It uses very complicated terms and is very vague at some points so I would prefer as a result to keep an open mind and to slowly research more into it and listen to the news more often. "It is not beyond the realms of possibility that today's EU of 15 could one day become a club of more than 40 states stretching from Iceland to the Caspian - no line has yet been drawn on the map". ...read more.