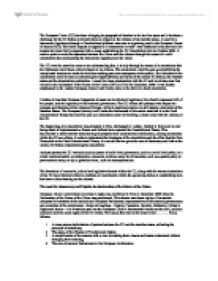 The European Union (EU) has been enlarging its geographical borders in the last few years and it has been a challenge for the EU bodies to directly have an impact on the citizens of its member states. A need for a democratic legitimacy through a Constitutional platform was seen as a growing need in the European Courts of Justice (ECJ). The initial impacts in regards to a 'constitution in need' were feathered in the previous five treaties but were firmly supported with a treaty establishing the EU Constitution held on October 2004. It made a point to unite the separation between the Union and the citizens through the means of a valid constitution that could portray the democratic legitimacy of the Union. The EU over the years has come to an understanding that, it is only through the means of a constitution that the Parliament could have a direct impact on its citizens. The constitution could be seen as simplifying the complicated treaties and make the decision-making part more transparent to the public. The functions of the constitution could be seen as overseeing the responsibilities and limits of the central EU bodies, the member states and the intermediary authorities. ...read more.

The need for democracy and Explain the declaration of the future of the Union European Union's commitment to citizen's rights was confirmed in Nice in December 2000 when the Declaration of the Future of the Union was proclaimed. This charter was drawn up by a Convention composed of members of the national and European Parliaments, representatives of the national governments and a member of the commission. Under six headings - Dignity, Freedoms, Equality, Solidarity, Citizen's Rights and Justice - it's 54 articles spell out the European Union's fundamental values and the civil, political economic and the social rights of the EU citizen. The issues that were to be raised in the .......... Are as follows: 1 A more precise delimitation of powers between the EU and the member states, reflecting the principle of subsidiary; 2 The status of the Charter of Fundamental Rights; 3 A simplification of the treaties with a view to making them clearer and better understood without changing their meaning; 4 The role of national Parliaments in the European Architecture. The DFC opened a wider debate on the simplification of the treaties, uniformity of human rights and the need for democratic principles. ...read more.

These increased intermediaries in the late eighties have given a misleading conception on the democracy of EU. The EU was portrayed in both the public and the scholarly debates as an elite game in the hands of economic interests and bureaucrats. Declaration of the future of the Union - Drafting Constitutional treaty (compare each other) EU having an impact on British Citizens. England has had no problems adapting to the EU law. The one area of difficulty has been in relation to the requirement to interpret national law in the in the light of the wording and purpose of non-directly effective provisions of directives. Curerent Issues concerning the EU constitution Emphasising on the current crisis of the democratic legitimacy of the European Union, John Palmer in his article on 'The Levels of Democracy' iterated that, France -- a founding member of the European Union -- was the first nation to reject the proposed constitution. Bibiliography Eriksen E, Fossum J, and Menedez J, 'European Union - On Constitution Making and Democratic Legitamcy', (Paper prepared for the Area Conference on Democracy and Democratic Governance), 2002 Weatherill S, Beaumont P, 'EU Law, The Essential Guide to the Legal Workings of the European Union', 1999, Penguin Books Horspool M, 'European Union Law', 3rd edition, 2004, Butterworths Core Text Series Wyatt D, 'EU Treaties & Legislation', 9th edition, 2004, Oxford University Press http://europa.eu.int/abc/12lessons/index9_en.htm http://projects.essex.ac.uk/ehrr/archive/pdf/File6-AskewMirwaldt.pdf. ...read more.