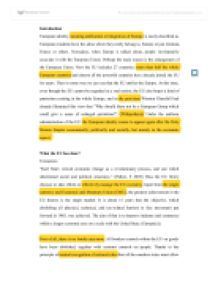 To what extent has the European Union been successful in &quot;establishing&quot; a coherent European identity

Introduction European identity, meaning unification or integration of Europe, is easily described as European residents have the ideas where they really belong to, Europe or just German, France or others. Nowadays, when Europe is talked about, people involuntarily associate it with the European Union. Perhaps the main reason is the enlargement of the European Union. Now the EU includes 27 countries, more than half the whole European countries and almost all the powerful countries have already joined the EU for years. Thus in some way we can say that the EU unifies the Europe. At this time, even though the EU cannot be regarded as a real nation, the EU also hopes a kind of patriotism existing in the whole Europe, and in the post-time Winston Churchill had already illustrated this view that "Why should there not be a European Group which could give a sense of enlarged patriotism?" (Wikipedia(a)) Under the uniform administration of the EU, the European identity seems to appear again after the Holy Roman Empire economically, politically and socially, but mainly in the economic aspect. What the EU has done? Economics "Karl Marx viewed economic change as a revolutionary process, and one which determined social and political structures." (Parker, E 2003) Thus the EU firstly chooses to take efforts to effectively manage the EU economy. ...read more.

Free education offers more chances for the generation to acquire more multi-cultural knowledge, which helps people to become more tolerant in order to cancel the nationalism in their mind. What cannot be involved in? There are 23 kinds of languages in the EU and the number of the member states is just 27. That is to say almost all the states have their own language. As we all know, art like painting, sculpture, except literature can transcend nations. When the author is going to express their feelings, they usually choose to use their mother tongue that they always are good at; however, the brushwork is similar, such as the mathematical symbols. Furthermore, the diverse culture of the states has more impacts on literatures than paintings. Therefore, in this aspect of the culture, the EU cannot integrate the Europe. For multi-culturalism, critical mass is a significant factor to build a cohesion society. The EU must certainly know the importance of how to make diversified religions live together; however, the reality is displeasure. Islam is widely considered as fastest growing religion in Europe, with immigration and above average birth rates leading to a rapid growth in the Muslim population. (BBC,2004) And many Muslims do not admit their European identity. "I am British and Asian. I am not European" (Condor,S 2007) ...read more.

However, there are still some residents belonging to the nationalism. They cannot abundant the tradition and history of their own state. So they do not care about the European identity. Whereas these "national" people do not know the truth that "today we always learn from the past to plan for the future, but we cannot live in the past". And these people are always poor and lack of education. It is impossible to say that they are meaningless for the society because they must take their own responsibility to others, but they cannot aim the development of the whole world as much as educated ones. On the whole, because of the dominant component in the world economy, the European identity is important and necessary for the world development, even though some one does not care about it. Conclusion Under the uniform administration of the EU, the whole Europe is developing in the vigorous direction by promoting the economy at first. Adding the peace that has existed in the Europe for years, the EU has already met its original goals. Religion is still a serious social problem that the EU has to face, but the European Union has been successful in "establishing" a coherent European identity in other aspects. On the other hand, a united, powerful, prosperous Europe is also beneficial to world peace. Although not everyone agrees with the European identity, there is no doubt that under the help of the EU, it exists in the Europe, and needs to exist forever. ...read more.

The author submitted this as a B-standard essay, which surprises me. What really holds it back is the very poor standard of English, which means that a lot of the statements are factually incorrect and the argument is extremely difficult to follow.

In general terms, structuring an essay on identity around the goals of the EU and the reach the institution has had into people's lives is not a bad idea, but it needs a lot more definition, factual references, and a better standard of expression.