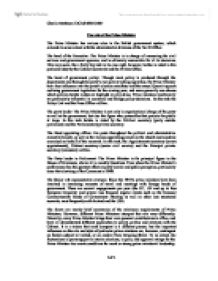 The role of the Prime Minister.

The role of the Prime Minister The Prime Minister has various roles in the British government system, which coincide to some extent with the administrative divisions of the No.10 Office: The head of the Executive: The Prime Minister is in charge of overseeing the civil services and government agencies, and is ultimately answerable for all its decisions. This may seem like a fairly big task in its own right, however, he/she is aided in this particular duty by the Cabinet secretariat and the Private Office. The head of government policy: Though most policy is produced through the departments and through the party's own policy making apparatus, the Prime Minister has a key influence over the party's election manifesto and the annual Queen's speech outlining government legislation for the coming year, and more generally can choose which policies he/she wishes to highlight or play down. Prime ministers traditionally are particularly influential in economic and foreign policy decisions. In this task the Policy Unit and the Press Office aid him. The party leader: The Prime Minister is not only in organisational charge of the party as well as the government, but also the figure who personifies that party to the public at large. ...read more.

As a general election draws near, the Cabinet and party usually rally to the Prime Minister, in the realisation that they will prosper or falter depending on how united they are behind the leadership. Margaret Thatcher proved to be the most dominant peacetime Prime Minister this century. She broke with a number of policies pursued by her Conservative predecessors and is credited with substantially changing the agenda of British Politics. Many of her policies are associated with her personally, including trade union reform, income tax cuts, privatisation and a reduced role for local government. She was forceful in Cabinet and in Parliament and willing to be seen as a figure apart from cabinet which did not score high on collegiality. She kept a close rein on her Chancellors and her Foreign Secretaries and, as a result, had troubled relationships with some of them. By the end her hostile attitude to the European Community (as it was then called) lost her the support of a number of her senior ministers. Mrs Thatcher is an outstanding example of somebody who regarded herself as a conviction rather that a consensus politician. She must be regarded as a successful Prime Minister, in terms of winning three successive general elections and introducing lasting radical policies, many of which have been accepted by successors, including Tony Blair. ...read more.

Secondly, his lack of an electoral mandate until 1992, thirdly, being surrounded by colleagues who were more senior and more experienced than himself. He lost much of his ability to speak for the nation, being treated by the media and the public alike as a target for ridicule and abuse. Progress in Northern Ireland was the principle prime ministerial achievement in this difficult period. The line of 'wait and see', or what Major called 'negotiate and decide', on the single currency just about held among Cabinet ministers until the general election. A strong contrast to Major and a similar figure to Thatcher is the current prime minister, Toney Blair. However, he has been a distinctive prime minister. On the basis of his first three years he already ranks alongside Mrs Thatcher as the strongest Prime Minister this century. Interestingly, his style of leadership closely resembles that of the leadership of his leadership of the party in opposition. His reforms of the party, particularly of Conference and NEC, were designed to make them more supportive of the leadership. In opposition he recruited a large team of aides to support him in the Leader's office and he relied on these and key figures such as Gordon Brown, rather than the shadow Cabinet. Charlie Matthews 12CAS 08/05/2007 1of 3 ...read more.