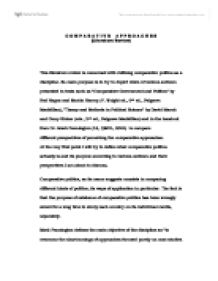 This literature review is concerned with defining comparative politics as adiscipline.

C O M P A R A T I V E A P P R O A C H E S (Literature Review) This literature review is concerned with defining comparative politics as a discipline. Its main purpose is to try to depict views of various authors presented in texts such as "Comparative Government and Politics" by Rod Hague and Martin Harrop (V. Wright ed., 6th ed., Palgrave MacMillan), "Theory and Methods in Political Science" by David Marsh and Gerry Stoker (eds., 2nd ed., Palgrave MacMillan) and in the handout from Dr. Mark Pennington (L2, QMUL, 2004) to compare different perspectives of perceiving the comparative approaches. At the very first point I will try to define what comparative politics actually is and its purpose according to various authors and their perspectives I am about to discuss. Comparative politics, as its name suggests consists in comparing different kinds of politics, its ways of application in particular. ...read more.

The reason is the innermost want of human being to belong to a certain group of people, to be accepted and tolerated by others. So, it is, assumingly, not our need to favor any sort of institution, nor to understand the real meaning or aim of such an institution, but it is based on listening to our needs solely, to our selfish, self-interested nature. This is the main point of rational choice theory "whose central focus is the purposeful individual and his motivation and beliefs." (Pennington, 2004) Whenever we talk about this approach we have to come back againto the nature of human being, its behavior, needs and wants, which seem to be the constant cause of i.e. free-riding/collective action problems too, which evolves form this theory. Human being is, according to M. Pennington, "a maximiser of benefits over costs", (2004) while struggles to "derive benefits from a particular good without paying their full personal share of the costs." ...read more.

R. Hague and M. Harrop discuss the reason to study politics comparatively, the risks which come with it and the specific techniques used. Globalization is one of the examples which pose a risk and a challenge simultaneously, but the reason is perceived by Green as "nation is a cell of a larger entity with a life all its own." All the authors try to bring an understanding of studying comparative politics. Each technique the disclipline is based on has its advantages and weaknesses. M. Pennington's summarizes the main approach within a new institutionalism, but obviously, there is no only one approach which should be used. Hopkin's method are generally about the risks each of them brings considering variables and case studies, importance of number we study. Hague and Harrop's theory talks about variables, their particular use, when the outcome may be successful. I am assuming most of the theories have to be put together in order to gerenare a realistic and true outcome, what is the purpose, to understand the processes and their influence. Comparative politics is about studying the practical use of a theory to create a theory more likely to succeed. ...read more.