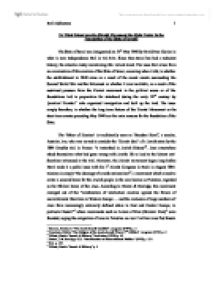 To What Extent was the Zionist Movement the Main Factor in the Foundation of the State of Israel?

To What Extent was the Zionist Movement the Main Factor in the Foundation of the State of Israel? The State of Israel was inaugurated on 14th May 1948 by David Ben-Gurion in what is now Independence Hall in Tel-Aviv. Since then Israel has had a turbulent history, the situation today maintaining this violent trend. The issue that arises from an examination of this creation of the State of Israel, occurring when it did, is whether the establishment in 1948 came as a result of the recent events surrounding the Second World War and the Holocaust or whether it was inevitable, as a result of the sustained pressure from the Zionist movement in the political scene or of the foundations laid in preparation for statehood during the early 20th century by 'practical Zionists'1 who organised immigration and built up the land. The issue simply therefore, is whether the long term factors of the Zionist Movement or the short term events preceding May 1948 are the main reasons for the foundation of the State. The 'father of Zionism' is traditionally seen as Theodore Herzl2, a secular, Austrian Jew, who was moved to consider the 'Zionist ideal' of a Jewish state by the 1894 Dreyfus trial in France: "a watershed in Jewish History"3. Jews everywhere asked themselves what had gone wrong with Jewish life to lead to the blatant anti-Semitism witnessed at the trial. ...read more.

Herzl identifies the 'Jewish Problem' as a nation plagued by anti-Semitism which meant that failure to assimilate lead to exclusion and repression as seen in Russia and that assimilation itself, and the commercial competition that this process would involve lead to anti-Semitism10, especially since assimilated Jews tended to be successful due to their community links and a need to prove themselves in their newly adopted secular world. Herzl needed to write about forming of Zionist institutions and then the diplomatic initiatives that followed, leading to the Balfour Declaration. Edmond Baron de Rothschild was also a significant influence over the details of the movement, needs to be included somewhere, and more source cross examination is also required some how. The religious aspect of the Zionist Movement, including Gush Emunim would be useful. Then go back to Hovevei Zion and the practical Zionism that Herzl didn't know about. 11 Max Dimont's interpretation of the Jewish Problem also needs to be explained.12 The Basle Conference in 1896 was particularly important in clarifying the Zionist relationship between Jews in the Diaspora and the State of Israel. Heater & Berridge's interpretation is contested by Hutchinson who suggests that Zionism came about "due to the failures of traditional religious structures and universal ideologies to provide Jews with a sense of direction in the religious world"13 meaning that Jews needed a search for a homeland to define them as a people. ...read more.