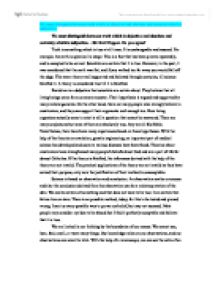 We must distinguish between truth which is objective and absolute and certainty which is subjective. - Sir Karl Popper. Do you agree?

We must distinguish between truth which is objective and absolute and certainty which is subjective. - Sir Karl Popper. Do you agree? Truth is something which is true at all times. It is unchangeable and assured. For example, the earth is spherical in shape. This is a fact that has been proven repeatedly, and is accepted to be correct. Scientists are certain that it is true. However, in the past, it was considered that the earth was flat, and if you walked too far away you would fall off the edge. This was a theory well supported and believed through centuries, till science falsified it. A theory is considered true till it is falsified. Evolution is a deduction that scientists are certain about. ...read more.

The practical applications of the theory are not invalid as they have served their purpose, only now the justification of their method is unacceptable. Science is based on observation and conclusion. An observation can be erroneous and also the conclusion derived from the observation can be a misinterpretation of the data. We can be certain of something and that does not have to be true. I am certain that fairies live on stars. There is no possible method, today, for this to be tested and proved wrong. I can try every possible way to prove my belief, but may not succeed. Most people may consider my idea to be absurd but I find it perfectly acceptable and believe that it is true. ...read more.

Which one of these statements should be considered true, as both can be supported by valid arguments. The truth should be accepted by everyone and any counter argument should not be valid. If something is true, it cannot be falsified. 'There are five stones in this container.' This is a statement, which is a fact. There may be different perceptions of the same things, as someone else may see the stones as paperweights and the container as a hat, but the fact remains that there are five and only five stones in this particular container. Such a fact cannot be falsified, and is true. People may perceive it differently but the verity of the statement remains. The statement is absolute, as, in that point in time, in that particular container there are just five stones. We must distinguish between truth which is objective and absolute and certainty which is subjective. ...read more.