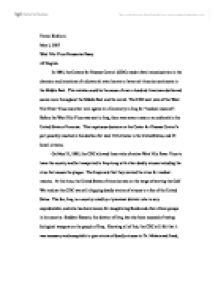 Trevor Kinblom May 1, 2007 West Nile Virus Persuasive Essay AP English In 1985, the Centers for Disease Control (CDC) made a fatal miscalculation in the character and intentions of a dictatorial state known to have anti-America sentiments in the Middle East. This mistake could be the cause of over a hundred American deaths and scores more throughout the Middle East and the world. The CDC sent vials of the West Nile Fever Virus and other viral agents to a University in Iraq for "medical research". Before the West Nile Virus was sent to Iraq, there was never a case or an outbreak in the United States of America. This impetuous decision on the Center for Disease Control's part possibly resulted in the deaths of at least 148 citizens in the United States, and 25 Israeli citizens. On May 21, 1985, the CDC allowed three vials of active West Nile Fever Virus to leave the country and be transported to Iraq along with other deadly viruses including the virus that causes the plague. ...read more.

Is it not peculiar that the outbreak of West Nile Fever Virus in New York City occurred virtually simultaneously with an outbreak in Israel? According to the CDC, the two outbreaks had 99.8 percent genetic similarities. This statement alone raises several questions, such as why would the CDC feel that it is necessary to test two different outbreaks on opposite sides of the world? Could it be because they feel that there is terrorist link? This can be very possible because the first case of a West Nile Fever Virus in several decades in Israel occurred in a flock of three thousand commercial geese. What better way to spread a deadly disease but to use live commercial product. The second case occurred in an elderly couple who both perished at the mercy of this ruthless virus. The elderly couple who became infected with West Nile Fever Virus lived in the Tel Aviv suburbs and had not left the Tel Aviv area in five years. The couple had not had any contact with any foreigners, they did not own any pets, and the most astounding detail is that there were no traces of mosquitoes found in the surrounding area in which they resided. ...read more.

If this is true, the United States of America could be responsible for its own demise. It is evident that the development of West Nile Virus in the United States of America was not due to natural occurrences, but because of an act of terror against our nation, and one of our closest allies, Israel. If the CDC had some prudence while dealing with the exportation of deadly viruses and countries ruled by tyrannical dictators it is quite possible that West Nile Fever Virus would have never appeared in the western hemisphere, and 148 Americans would still be alive enjoying life. This is a near perfect biological attack planned by Hussein. The West Nile attack is subtle and not killing mass numbers of people, and the virus will just keep spreading throughout the United States and the western hemisphere. In addition, if it is true that Hussein's SV1417 strain does exist it could mean the demise of the free world, and it would be because of the apparent incompetence and misjudgment of the CDC officials. ...read more.