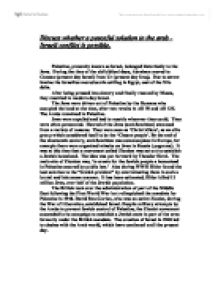 Discuss whether a peaceful solution to the arab - Israeli conflict is possible.

Discuss whether a peaceful solution to the arab - Israeli conflict is possible. Palestine, presently known as Israel, belonged historically to the Jews. During the time of the old biblical days, Abraham moved to Canaan (present day Israel) from Ur (present day Iraq). Due to severe famine the Israelites moved south settling in Egypt, east of the Nile delta. After being pressed into slavery and finally rescued by Moses, they resettled in modern day Israel. The Jews were driven out of Palestine by the Romans who occupied the land at the time, after two revolts in AD 70 and AD 135. The Arabs remained in Palestine. Jews were expelled and had to resettle wherever they could. They were often persecuted. Hatred of the Jews (anti-Semitism) stemmed from a variety of reasons. They were seen as 'Christ killers', as an elite group which considered itself to be the 'Chosen people'. By the end of the nineteenth century, anti-Semitism was commonplace in Europe, for example there were organized attacks on Jews in Russia ( pogroms). It was at this time that a movement called Zionism was set out to establish a Jewish homeland. The idea was put forward by Theodor Herzl. The main aim of Zionism was, 'to create for the Jewish people a homestead in Palestine secured by public law.' Also during WWII Hitler found the best solution to the "Jewish problem" by exterminating them in such a brutal and inhumane manner. It has been estimated, Hitler killed 11 million Jews, over half of the Jewish population. The British took over the administration of part of the Middle East following the First World War but relinquished the mandate for Palestine in 1948. David Ben-Gurion, who was an active Zionist, during the War of Liberation, established Israel. Despite military attempts by the Arabs to prevent Jewish control of Palestine, the Zionist movement succeeded in its campaign to establish a Jewish state in part of the area formerly under the British mandate. ...read more.

A curfew was placed on the citizens of Hebron-120, 000 Palestinians were punished to guarantee the safety of only 450 Jewish settlers in the area. If the Jews are not willing to compromise with the Palestinians in such circumstances there cannot be peace. The five major wars led to loss and gaining of land. This caused boundaries of what of what belongs to the Jews and Palestinians unofficial. The peace process is attempting to provide mutually recognized borders for all the nations in the area, but the success of this process is not guaranteed. Jerusalem is a big issue that both nations desperately want as it is their capital city and also because it contains both of their religions holy shrines, e.g. the wailing wall which is the only remains of what was their Holy Temple before the revolt in 135 AD, and also the Al-Aqsa mosque which is mainly known as the 'Golden Dome'. This is though by Muslims to be the last place in which their prophet Mohammed was in, until he was thought to have ascended into heaven. The Al-Aqsa mosque is also thought to have the foundations of Solomon's temple. Jews now want this mosque/temple back by depriving Muslims from entering into their own mosque to pray so that they themselves can build underground tunnels to get to the foundation of the temple, therefore weakening the mosque so it'll fall. By doing this, the Jews can the take over and begin to rebuild the temple upon the foundations of King Solomon's temple to do their sacrifices in. The area of Temple Mount is vulnerable to violence because there are many mosques and synagogues as well as the Wailing Wall that intermingle and is a meeting place for worshippers of Jews and Palestinians. On Friday 9 February 2001, Palestinian radicals planted a car b**b outside a synagogue in Temple Mount. Miraculously no one was injured. ...read more.

People will not approve of peace if they are going to be continually attacking the opposition each time because of revenge and not compromising and being able to 'forgive and forget'. On 23rd July 2000, Bill Clinton was in Camp David to push the Middle East talks forward. He was said to be 'hopeful'. The reaction of the Israeli government was also largely optimistic as Mr. Barak was reported to have told the cabinet minister that the prospects for peace were now 60-40. The former president of U.S.A, Clinton, said, " there is a rhythm in everyone of these thing I've been involved in." Clinton had pushed the peace talks so far that there was a spurt of hope for peace, but now that Sharon is the new Prime Minister, hopes for peace have died down. President Bush promised on 7 February 2001 to 'Play the hand we've been Dealt' and work the Yasser Arafat and Ariel Sharon to make peace. A White House spokesman said the president had telephoned Mr. Sharon to say that he looked forward "to working with him, especially with regard to advancing peace and stability in the region." These are good signs to show that Bush is continuing from where Clinton had left to pursue in continuing with pushing the peace process forward. Refugees are now getting more help. Small peace organizations such as the 'Peres center for peace' promote reconciliation and cooperation between their people in this period of transition to peace. These peace organizations show us that there are still people willing to make peace on both sides despite the dangers of publicizing peace organizations, as there are fundamentalists, who reject the word peace and so in some cases, go to the extremes of killing people who believe that peace may still be established. This shows us that people are still patient, tolerant and forgiving to be able to work together in order for the voice of reason to prevail and for dialogue and cooperation to replace violence and yet risk their own life's for peace's sake. ...read more.