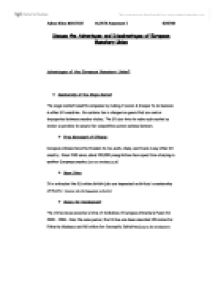 Discuss the Advantages and Disadvantages of European Monetary Union Advantages of the European Monetary Union? * Membership of the Single Market The single market benefits companies by making it easier & cheaper to do business in other EU countries. No customs tax is charged on goods that are sold or transported between member states. The EU also tries to make each market as similar as possible to ensure fair competition across national borders. * Free Movement of Citizens: European citizens have the freedom to live, work, study, and travel in any other EU country. Since 1995 alone, about 100,000 young Britons have spent time studying in another European country. (Source: www.bized.ac.uk) * More Jobs: It is estimated the 3.5 million British jobs are dependent on Britain's membership of the EU. ...read more.

When the EU speaks it represents about 400 million people .This is more than the combined population of the United States & Russia. (Source: EU official website) * Greater Protection for Workers: The European Working Time Directive is an EU initiative designed to protect workers from exploitation by employers. The directive lays down regulations on matters such as how many breaks an employee can take, and how many holidays they are entitled to each year. It also aims to limit the average time an employee can be compelled to work to 48 hours a week. (source:Bized) * Greater Equality and Social Inclusion: Through EU directives citizens are protected from employment discrimination on the basis of gender, s****l orientation, religion or belief, disability and age. ...read more.

People who are affected by EU decisions have little chance to make their voices heard. * Concentration of Power: EU institutions have too much power. They have taken away the right of individual countries to make their own decisions about economic and political matters. (source:Tutor2u.net) * Speed of Integration: The EU is moving towards more and more integration at a phenomenal rate with not enough thought or debate on the issues. The UK risks being swept by this tide of integration without plotting and following its own course in the interest of its own citizens. * Loss of UK Sovereignty: Membership of the EU has led the UK to lose its sovereignty. As a result the UK is no longer free to develop its own policies, make its own laws, or control its own economy in response to its own needs. ...read more.