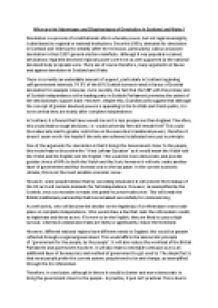 What are the Advantages and Disadvantages of Devolution in Scotland and Wales?

One of the arguments for devolution is that it brings the Government closer to the people, this would help to thus solve the "West Lothian Question" as it would mean the Welsh rule the Welsh and the English rule the English. This would be more democratic and provide greater choice of MPs to both the Welsh and the Scots however it will only create another layer of government and thus increase cost to the tax payer. In the current economic climate, this is not the most sensible economic move. However, some people believe that by conceding devolution it will prevent the breakup of the UK as it will concede demands for full independence. ...read more.

The simple fact is that most people prefer the current system, people tend to be anti-change, as exemplified through the AV referendum. Therefore, in conclusion, although in theory it would be better and more democratic to bring the government closer to the people - in practice, it just isn't practical. This is due to the heavy economic implications as well as the general confusion such a political change would incur. Small devolutionary steps are likely to pass off into leaps, as exemplified through the SNP's nationalistic ideologies. Their hunger for power, and the preservation of the UK is best controlled therefore by not devolving matters further. In the current economic climate, the change just isn't feasible and people tend to prefer the norm and are thus, anti-change. ...read more.